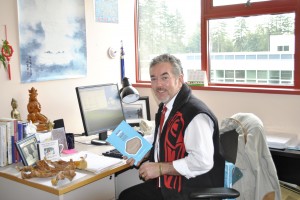 Cascadia: The Life and Breath of the World (2013), a collection of environmental writing from the B.C./U.S. Pacific Northwest region, has been cited as a “Notable Special Edition 2013” by the selectors of the annual Best American Essays in the U.S.

The collection was published as special book edition of Manoa Journal from University of Hawaii in Honolulu, partly because Hawaiians share an old affiliation with B.C.  Recruited by the Hudson’s Bay Company in fur-trading days, and known as “Kanakas”, some settled at old Fort Langley and at Stanley Park and were used in helping portage canoes up the wilder reaches of the Fraser River. Place names in the area still bear evidence of this old connection—Kanaka Bar on the Fraser, Kanaka Creek and, in Maple Ridge, there’s Kanaka Drive.

First Nations authors from B.C. in the book include Lee Maracle, Richard Van Camp, Eden Robinson, Richard Wagamese, Chief Dan George and Chief William K’HHalserten Sepass. Artwork is by Emily Carr from her original journals when she first visited the old native villages up the B.C. coast in the early 1900s. Permission to reprint these sketches came from the Provincial Museum and Archives.