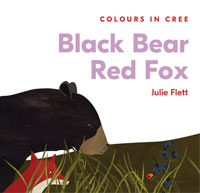 Vancouver-based Cree/Metis author, visual artist, and illustrator Julie Flett is a finalist for the TD Canadian Children’s Literature Award organized by The Canadian Children’s Book Centre. This annual literary award is worth $30,000. The award will be announced in Toronto on November 21, 2017.

Flett’s nomination is for When We Were Alone (HighWater Press) which includes text written by her co-author David Alexander Robertson. Other books nominated by B.C. authors are The Skeleton Tree (Tundra Books) by Gabriola Island’s Iain Lawrence; A Day of Signs and Wonders by Victoria’s Kit Pearson. Also nominated are Tokyo Digs a Garden (Groundwood Books) by Jon-Erik Lappano and Kellen Hatanaka; The Tragic Tale of the Great Auk (Groundwood) by Jan Thornhill.

Flett’s When We Were Alone has won the McNally Robinson Book for Young People Award; received Honourable Mention for the Alcuin Society Children’s Award; chosen for CCBC Choices 2017 picture books for school-age children best-of-the-year list by the Cooperative Children’s Book Center; selected by The Canadian Children’s Book Centre for Best Books for Kids & Teens and signified as a title of exceptional caliber; and as one of  Bank Street College of Education Best Children’s Books of the Year. Julie Flett will be presenting her latest book, Black Bear Red Fox: Colours in Cree Board book (Garfinkel Publications), at the WORD Vancouver festival, Sunday, September 24, 2017 at 1:45 at The Quay stage on the south side of the Vancouver Public Library, 350 West Georgia Street. Black Bear Red Fox is a detailed explanation of how colour words work in Cree from the Cree Literacy Network. 978-1554765218