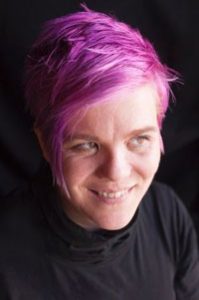 For British-based graphic novelist and activist Kate Evans (at right), the only proper response to the refugee crisis facing Europe (and the rest of the world) is action. In her latest graphic novel, THREADS: From the Refugee Crisis (Verso $33), Evans chronicles her experiences while volunteering at the Calais refugee camp in France after hearing reports of occupants living in slum conditions. Evans travelled to Calais in 2015 armed with a sketchbook and an open mind.

In Calais, Evans found the refugees inhabiting a sprawling shantytown of shipping containers and makeshift tents which she depicts in THREADS with gripping visual power. Combining reportage and art she bears witness to the squalid conditions faced by the more than 8,000 refugees and asylum seekers (mainly from the Middle East and Africa) that lived in the camp before it was demolished in October of 2016. A panel from THREADS by Kate Evans As part of her activism, Kate Evans will be giving a multi-media presentation of THREADS on Friday, September 29th at 7:30pm at The Chan Centre for the Performing Arts (UBC). The evening will feature Kate reading from her book with projected images, and musical

accompaniment by Iranian-Canadian hand drummer Hamin Honari. This performance will include Evans discussing the power of comics as journalism and visual narrative as a means to inspire social change. Evans will be joined in the discussion by Fay Nass—a theatre artist and filmmaker who draws from her experiences growing up in war-torn Iran, and Shawk Alani—co-founder of the Iraqi Oral History Project who leads workshops for Syrian children in Vancouver.

Kate Evans talks briefly about the making of THREADS in this short video.

THREADS is described by Alison Bechdel, creator of the acclaimed Fun Home, as “Comics journalism at its finest…Evans both captures the wrenching reality of a seemingly intractable problem and makes an eloquent argument for its solution: open borders.” Kate Evans is being presented as part of an ongoing series at The Chan called Beyond Words. Curator of the series is Wendy Atkinson, who describes THREADS as “A launch pad for important conversations about prejudice and the politics of borders.” Atkinson adds, “We are excited to have Evans here for this live reading and to engage our audiences in dialogue about the vital relationship between the arts and social justice.” The Beyond Words series was launched in 2012 to explore the power of storytelling through performance as an agent of change and means of igniting conversation. Upcoming in March of 2018, the series will present Polaris Prize-winning Inuit vocalist Tanya Tagaq alongside Greenlandic mask dancer Laakkuluk Williamson Bathory.

For tickets to see Kate Evans go to The Chan website