While anticipating his fifth book after a 40-year hiatus, Henry Rappaport recalls the heady days of Intermedia when visual, performance and language artists collaborated to create boundary-breaking new works. 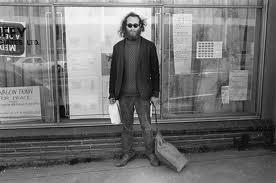 “The last time I began publishing,” says Henry Rappaport, “it led to forty-plus years in the printing business. Those days are over. The poetry is now for itself.”

In the late 1960s and early 1970s, Vancouver’s art, poetry and publishing scenes were very different from today. Much of them were consciously and intensely experimental and collaborative. Intermedia exemplified those trends most visibly in Vancouver. Painter and poet, Roy Kiyooka was one of the founders of Intermedia.

Established in the late Sixties with the efforts of established artists like Jack Shadbolt, Roy Kiyooka and others, Intermedia became the locus for independent and collaborative work by visual, language and movement artists. The preponderance of visual artists in the movement influenced a significant number of poets.

It is not surprising that this happened when concrete poetry was coming to the fore. While most poets like Gerry Gilbert, Maxine Gadd, Judith Copithorne and others refrained from applying the label ‘concrete poetry’ to describe their work, they were in fact creating concrete poems and sometimes books and collections of poetry where the form transitioned between linguistic and visual art thereby benefitting both.

The influence between the art groups wasn’t only one way. The photographer Michael DeCourcy, for instance, incorporated language into his box art project which was displayed at the museum of Modern Art in New York as well as in Vancouver. DeCourcy included poetry as one of the box faces.

Dennis Vance produced sound sculpture exploring the effects of random movement through space triangulated by three distinct radio signals. As the sculpture swung through space, the listener picked up different messages which collaged themselves into an aural experience symbolic of the random nature of messages we experience in an electronic age.

Ed Varney’s Openings and my poem Heat in the Heart were the first two books Intermedia Press printed and published. It is really more accurate to call them collections bound in unusual ways rather than books. Openings for example was collected in an envelope and Heat in the Heart was held together in a box donated by McMillan-Bloedel. It had a self addressed stamped envelope for reader feedback. After forty years, I’m still waiting for my first reply.

An aspect of the way people interpreted the word, ‘Intermedia’, had to do with intense interest in the nature of the process of making art. Poets and artists of ‘The Press’, as we came to call Intermedia Press, were exploring the medium as they were using it. Intermedia was the only publisher which printed its own books not just for economic reasons but also as a way of uncovering new meanings.

Heat in the Heart was run off one page at a time and each page was taped to a window at Intermedia’s then current location on fourth avenue (the current location of Zulu Records). The window filled as the book grew and you could participate in a sense of the process of growing the collection as I wrote new poems and decided which to include. For me it was a unique way of visualizing the book and exploring its existence in time.

DeCourcy, as was his habit, documented this and much else that went on at Intermedia. Heat in the Heart in its own way was an example of the efforts of many of the Intermedia artists to reach out into the community. Poetry readings, shows and performances were given throughout the lower mainland and in Victoria. Regular Thursday noon lunch/poetry readings were held at the Vancouver Art Gallery, and every year for a few years Intermedia took over the entire gallery for a week. Then the loose collection of artists that was Intermedia, the poets, the film makers like Dave Rimmer, the videographers, the musicians like Don Druick, sculptors like Glen Topping, dancers like Karen Rimmer, sound sculptors like Dennis Vance, painters including Michael Morris, Gary Lee Nova, Gregg Simpson, photographers, and others were gently herded together with the help of Werner Allen and the gallery’s Margaret Pinney. It was an exciting opportunity for many Vancouver artists to collaborate and showcase their work and for the gallery to host and celebrate with the community art that grew out of the local scene.

When Intermedia moved to First Avenue and Semlin in East Vancouver, Intermedia Press established itself in the basement of a large house that was part of the complex Intermedia rented. With the help of John MacDonald, we bought our first offset press, a Rotoprint, from a music publisher in New Westminster and spent the summer printing Junk Mail a remarkable collection of collaborative poetry and visual art from a large number of local artists, bound in a blank Rothman’s box donated by Benson & Hedges. Many artists pitched in and we mainly mailed Junk Mail as an unsolicited art gift.

The Rotoprint was a beast that taught us how difficult it is to be a good printer and how frustrating it can be to work with difficult equipment as my collection of meditative poems, A Book of Days attests. We scaled down and bought a friction feed Gestetner printing press and thought we had hit the big time. With the help of some small Canada Council grants we started ‘publishing’ books of poetry and art by Jim Carter, David West, Gregg Simpson, Maxine Gadd, Carol Itter and others.

Carol’s book, The Log’s Log, was the log of a log, and it was printed on cardboard, a medium as close to the log as we could get. Sometimes the medium was the message. The Gestetner also printed Are Words Things? my lyrical response to a summer living at Cape Scott.

The old church at First Avenue and Semlin was Intermedia’s last home. The press set out on its own and rented a store front on Richards Street near Robson. By the time we finished cleaning and fixing the space, we realized it was too small for a printing operation and we found a perfect loft at the corner of Beach Avenue and Hornby Street.

At Richards Street however, another important project began, “The Poem Company.” Each week we would print and mail for free an 8-page magazine of poetry and art. All the work was anonymous and we continued the project for a year. A few copies of the entire project were bound in book form. The format size was 4 1/4 x 5 1/2, a standard 8.5 x 11 folded twice.

Intermedia Press lived at Beach and Hornby for a few years during which time we continued to publish books of poetry and art and began to seriously study the craft of printing. We attended Vancouver Vocational Institute (now VCC) at night and learned how to print on state-of-the-art equipment and perform such arcane operations as making colour separations with a twenty-foot flatbed camera whose film we processed in the dark.

During that period we printed Dream Surgeon, my forth and final book. I made the colour separations for the cover and we printed, sewed and bound the book except for the cover. We couldn’t yet print full colour although we were getting close.

While we were becoming good printers, we were never very successful selling our books of poetry and art. We experimented with a few ‘trade books’ like The Coffee Lover’s Handbook and a series of gardening books by local expert Bernard Moore. The few grants we received barely covered the cost of materials, and even the trade books were not enough to pay the rent.

Since Intermedia itself was no more, we couldn’t get financial help there. We began printing catalogues and posters for three of our local art galleries, the Vancouver Art Gallery, the Burnaby Art Gallery and the Surrey Art Gallery. They were great friends and supporters.

The first full colour work we actually printed was a poster for the Vancouver Art Gallery produced on a vintage single-colour Miehle offset press. It was a great press and we did a great job! By this time Intermedia Press had worked its way down to two people, Ed Varney and me. As we focused more on making a living, we hired a part time bookkeeper and CASE counselor, Charlie Young, and started to study business. We moved to Intermedia Press’s final home in Mount Pleasant and discontinued our publishing.

After a few years, Intermedia Press Limited was down to one shareholder and, for the next thirty-odd years, it developed into a viable printing company employing over 30 people that won major printing awards. In 2003, the company was sold.

I had continued writing poetry since the publication of Dream Surgeon but did almost no publishing. After the sale of the press, I began a long and fruitful re-engagement with the contemporary poetry environment. I studied with poets Karen Solie, Robert Hass, Don McKay and others. I began publishing individual poems and after six years completed Loose to the World, my latest book published by Ronsdale Press.

For more on the artistic ferment in Vancouver during the Sixties, we recommend you visit the virtual book Ruins In Process: Vancouver Art in the Sixties. It is a web-based research archive and educational resource that brings together still and moving images, ephemera, essays and interviews to explore the diverse artistic practices of Vancouver art in the 1960s and early 1970s.