An eloquent voice to darkness 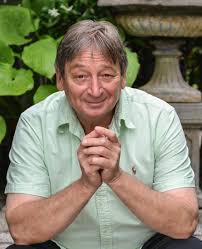 Some say, write what you know.

But for Timothy Shay, it’s know who is writing.

Timothy Shay is as active organizing and promoting literary events as he is writing and publishing his own work. For 22 years, he hosted a reading series in Nelson. Now that he has returned to the Lower Mainland, where he was raised as a child, he hosts the monthly Hogan’s Alley Open Poetry Readings in Chinatown, and also co-hosts the Pandora’s Colective Twisted Poets series at the Prophouse on Venables Street. Shay has also been the editor of Horsefly Literary Magazine.

This year the organizer bunny is adding a new collection of poetry to his existing body of five poetry chapbooks and one other book of poems, The Dirty Knees of Prayer (Caitlin Press $18), described by his publisher as, “hot and dark as night rain.” Kootenay poet Tom Wayman says the poems “reveal lives illuminated by a bleak light: he is not afraid to portray ‘the corners where dark night / stores its darker hollows.’ Yet the tough vision of dysfunction the poems offer—’a family where everyone broken / reached out to everyone broken’—is redeemed by a sparkling precision of observation and a confident deployment of language. Shay can capture a landscape during a specific moment in late autumn as accurately as any camera: ‘Snow did not give / yellow leaves the time to depart.’ The indifference of nature, or the divine, to human failings or suffering is encapsulated with reference to ‘the Earless Infinite.’ An elegy for a miner father, stoic in the face of a fatal occupational disease (‘always silence leading to silence’), ends with a powerful haiku-like image: ‘No one returns to the empty chair. / The shadow there appears to give speeches.’ Indeed, all Shay’s poems in The Dirty Knees of Prayer give eloquent voice to darkness, while the poet’s command of craft lets us listen absorbedly to the wisdom and insight his poems have to convey.”