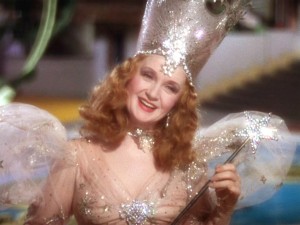 Most people remember the actress Billie Burke, if they remember her at all, for her role as Glinda the Good Witch of the North in MGM’s 1939 film, “The Wizard of Oz,” but many years before that she was a famous stage personality, in London and New York, as well as being the wife of Florenz Ziegfeld.

Grant Hayter-Menzies’ biography Mrs. Ziegfeld: The Public and Private Lives of Billie Burke (McFarland & Company, US $25) is the first to be written about her. The book’s release was planned to be concurrent with the 70th anniversary of “Oz”. “It is something of an ‘authorised’ biography,” says Hayter-Menzies, “as Burke’s daughter and grandchildren cooperated with me in researching Burke’s private life.” He also interviewed actors who performed with her on stage and screen.

“Billie never really stopped being an Edwardian beauty, with all the exaggerated characteristics of behaviour and address that this implies,” writes Hayter-Menzies. “Her effusions strike a note either false or sensual to the modern ear. But they were neither – they were simply the way Billie Burke knew best how to express herself and further her interests at the same time.”

Hayter-Menzies is also the author of the first biography of the American musical comedy star, Charlotte Greenwood (1890-1977), which is based on exclusive access to Charlotte’s unpublished memoirs, letters, and memorabilia. Movie critic Rex Reed wrote, “A unique talent and an overlooked chapter in show business history, diligently researched and informatively written. Beloved Charlotte Greenwood has been brought back to life with candor and charm. A movie lover’s must-read!”