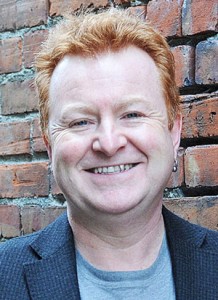 Grant McKenzie will be launching tenth thriller, The Butcher’s Son, and its prequel, The Fear In Her Eyes, released in trade paperback in June, at Chapters Victoria, 1212 Douglas St., on Friday, Sept. 23 at 5 p.m.

The former Monday magazine editor will also be reading at a special Literacy Victoria event alongside Tricia Dower at Bolen Books on Monday, Sept. 26 at 7 p.m.

The protagonist of The Butcher’s Son, Ian Quinn, was introduced in The Fear In Her Eyes, works as a child protection officer in Portland, Oregon. With tough exterior, he’s something of a broken man within. In The Butcher’s Son he struggles to uncover a mystery that reaches right back to his childhood.

“I’ve always been a storyteller,” says McKenzie, who has worked for three years at Our Place Society as its communications director. “And I’ve been fortunate that my day jobs have provided me good fuel to feed my imagination. After working all day, it can be a struggle to go home, cleanse the mind palette, and write. So I end up doing most of the writing on weekends and then edit the drafts during the week. When I’m finished the first draft of a novel, it’s actually more like a hundredth draft as I’m constantly editing and rewriting as I go.”

McKenzie signed a five-book deal with Polis Books of New York last year that brought three of his previously published novels to North America for the first time, plus two new ones. The Butcher’s Son is the second new book in the deal. McKenzie is also published in the U.K., Germany, Taiwan, Australia, New Zealand and China.