Rage against the nonsense

Relentless funny, Peter Babiak skewers the obnoxious spread of pretentious writing in his essays for Garage Criticism, including the vacuous pomposity of students who can barely speak coherently. 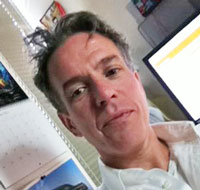 By day, Peter Babiak is a mild-mannered Langara professor of English literature. Come sundown, he morphs into Garage Critic—the scourge of empty-headed, feeble-minded purveyors of what passes for post-Modern thought.

Free of any curriculum but his own, Garage Critic romps down the main drag of contemporary global culture with the irrepressible bravado of a teenage vandal on Friday night, tagging over the digital avatars many people have come to prefer to their real selves.

Fifty Shades is just a strip-mall cover of Pauline Reage’s, The Story of O, which enjoyed a brief vogue as an underground cult classic in the Sixties due to its identical subject, but faded fast due to lack of enduring literary quality or intellectual merit. Gray will fade to off-white even faster in today’s faster spin-cycle.

In his Garage Criticism (Anvil $20), Babiak does what smart people are supposed to do—question the real meaning and implications of elements of the larger culture that permeates our lives and to a large extent determines who we are, with or without our permission or connivance.

As Garage Critic, he’s taking up the scalpel wielded by the likes of Walter Benjamin, Susan Sontag, William Safire and Canada’s own culture vultures, Mark Kingwell and the inimitable Brian Fawcett. If you haven’t head of any of these people, well, I’m sorry.

Garage Criticism recalls Sontag’s eclectic now-classic Against Interpretation, published in the early Sixties, in which she stunned the intellectual community by taking a critical approach that paid lip service to academic (serious) discourse, but applied it to the analysis of popular (trivial) culture phenomena. The trick didn’t always fly; Sontag’s style sometimes invested subjects with an importance out of proportion to their actual significance and she had trouble conveying her sense of humour in writing.

Like Fawcett, Babiak dares to address popular culture in language it can understand. Colloquial and relentlessly funny, Babiak uses personal anecdotal hooks to draw the reader to more serious issues. His academic colleagues will probably scorn him for interdisciplinary cross-dressing or “dumbing down the discourse.”

I remember being very disillusioned at meeting many Very Smart People at UBC in the early Seventies and seeing all this insight and intellectual brilliance deliberately hidden behind masks of discipline-specific critical jargon concocted to exclude non-speakers from participating in “the discourse.”

At a time when our culture is not only communicated but actually composed of digital media, so easily manipulated by political and corporate interests, we desperately need critics who aren’t afraid to call The Discourse a SnapChat.

It should be noted the Peter Babiak is as an editor of sub-terrain, Canada’s most enduring and inclusive literary journal and one of the very few that enjoys no academic sponsorship, thus kisses no Creative Writing or English Department ass. When Babiak’s mini-essays preface an issue, they’re invariably the first of many refreshing kicks to the synapses.

My personal favourite called “But my ideas are good, right?” features the Professor (displaying all respect due to racial, religious, gender and sexual orientations) patiently trying to explain to a student that since thinking is a function of language, if you can’t speak and write coherently, then you simply can’t think, so no, your ideas are totally crap.

Imperfectly expressed ideas are worse than worthless; meaningless at best, and as many demagogues of recent history have demonstrated, also often dangerous because they allow raging idiots whose name is Legion to attach any meaning they want to them.

We need Garage Critic. He is a ruthless wrangler of sacred cows of contemporary culture, a destroyer of digital worlds, unconstrained by academic discipline or exclusive elitist jargon. Garage Critic is a man who calls an ergonomically-designed, artisan-crafted spade a frigging shovel. 978-1-77214-050-7

One Response to “Rage against the nonsense”