Goldberg and other Jewish variations 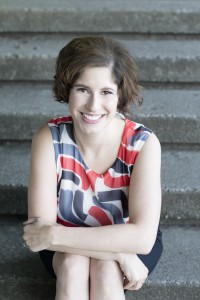 As Education Director at the Vancouver Holocaust Education Centre, Adara Goldberg has published her first book, Holocaust Survivors in Canada: Exclusion, Inclusion, Transformation, 1947-1955 (University of Manitoba Press 2015), to trace the influx of 35,000 Jewish survivors of Nazi persecution and their dependants who came to Canada in the decade following World War II.

Goldberg examines how Canadian resettlement officials and established Jewish communities both coped with major difficulties in order to incorporate the post-genocide migrants. Her research was conducted at Holocaust survivors’ kitchen tables as well as in traditional archives. Adara Goldberg received her Ph.D from the Strassler Center for Holocaust and Genocide Studies, Clark University. ($24.95 978-0-88755-776-7)

Adara Goldberg is just one of many authors appearing at this year’s JCC Jewish Book Festival (Nov 21-26, 2015) in Vancouver. As usual, this festival offers something of interest for every age group and every literary taste. The Opening Night Gala Event (November 21) will feature SEAN MICHAELS in Conversation with Hal Wake. The winner of the Scotiabank Giller Prize talks about his “haunting and brilliant” book Us Conductors.

Besides Goldberg, local authors include LEAH GOLDSTEIN, World Kickboxing Champ, former Israeli Commando and ultra-endurance cyclist with her book No Limits, children’s author and educator DAN BAR-EL with Nine Words Max and Audrey (Cow) which was recently named finalist in the Governor General’s Literary Awards, and easily one of the liveliest and versatile lecturers on Russian literature and culture, MARINA SONKINA. Local ecologist ALEJANDRO FRID searches for optimism with A World for My Daughter. Addressing his three-year-old daughter Twylla Bella, Alejandro Frid of Bowen Island tells her he has “jettisoned my gigantic cynicism, at least most of it for most of the time, and focused on the positive and the doable” in order to write A World for My Daughter: An Ecologist’s Search for Optimism (Caitlin $24.95), his compendium of person experiences as a wildlife researcher in Alaska, Chile and central British Columbia, as well has his involvements in environmental protests and rallies in Vancouver. Now an ecologist for First Nations on the central B.C. Coast, Dr. Frid was born and raised in Mexico City and has lived most of his adult life in B.C. He has been arrested twice for civil disobedience against fossil fuel companies. 978-1-927575-96-3

Hailed as “the great Israeli novel” (Time Out Tel Aviv) and winner of the prestigious Bernstein Prize; ASSAF GAVRON’s THE HILLTOP is a bestseller in Israel and now published in eight countries and counting;

Headlining the Festival’s annual Book Club Event NOMI EVE, presents her new release Henna House. From the traditions of the Yemenite Jews, to the devastation of the Holocaust and the birth of the State of Israel, Eve brings to life a fascinating period in the twentieth century;

RUTH TAL’s Closing Night Event is ideal for foodies. The celebrated restaurateur and entrepreneur shares over 200 delicious and energizing plant-based recipes in her new cookbook SuperFresh, bursting with natural flavours and pure goodness;

AYELET TSABARI, winner of the 2015 Sami Rohr Prize for Jewish Literature, presents the vividly cinematic short stories from her collection The Best Place on Earth;

STUART ROJSTACZER , winner of the Outstanding Fiction Debut prize for The Mathematician’s Shiva reads from his wryly-funny coming-of-middle-age story;

In Trees on Mars, Toronto’s cultural critic and author Hal NIEDZVIECKI argues that our society’s singular emphasis on creating and owning the “future” is unprecedented in human history, while  outstanding

RABBI AVI WEISS will share the story of his struggle to free Soviet Jewry in the ‘70s with Open Up the Iron Door. “The Jewish Book Festival embraces everyone who loves the written word” says newly appointed Festival director, Dana Camil Hewitt. “Jewish writers are part of the diverse fabric surrounding us: their themes are universal, but their approaches as varied as the world we live in. We will be exploring connections of literature with music and the visual arts, discovering exotic and colourful Jewish communities, debating politics and the environment: there will be something for everyone with our diverse and entertaining selection of celebrated authors and panelists.”

Regular updates and Tickets can be found on the website at www.jewishbookfestival.ca or by phone at 604.257.5111. The Jewish Book Festival program guide is available at select locations throughout the Lower Mainland after October 20, 2015. All events take place at the Jewish Community Centre of Greater Vancouver (950 West 41st Ave @ Cambie).

One Response to “Goldberg and other Jewish variations”