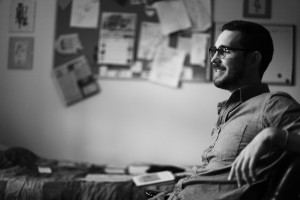 With endorsements from Jack Hodgins (“remarkably strong, original and new”), Madeleine Thien and Michael Crummey, Matt Rader’s debut first collection of stories What I Want to Tell Goes Like This by Matt Rader (Nightwood Editions, October, 2014),  set mainly in the Comox Valley, will revisi the shooting death of union leader Albert “Ginger” Goodwin in 1918 as well as the Coal Strike of 1912-1914. Stories of labour activism from the early twentieth century are mixed with contemporary experiences that include two boys experimenting with sexual violence at the end of a secluded logging road. The final story won The Malahat Review‘s 2014 Jack Hodgins Founder’s Award for Fiction. Born in 1978, Matt Rader grew up in the Comox Valley, studied writing at the University of Victoria and Banff, and has lived in Vancouver, Kelowna and Oregon. As the editor of a literary chapbook imprint, Mosquito Press, and co-founder of Crash: Vancouver’s Indie Writers Fest, Matt Rader released a debut collection of poetry entitled Miraculous Hours (Nightwood 2005), nominated for the 2006 Gerald Lampert Memorial Award. It was followed by a second collection, Living Things (Nightwood 2008), and a third, A Doctor Pedalled Her Bicycle Over the River Arno (Anansi 2011).