Gathie Falk was one of the few women who excelled in the "boy's club" of B.C.'s experimental art scene in the 1960s. 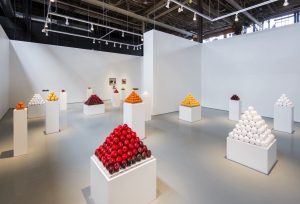 Robin Laurence has traced Falk’s productivity from a Mennonite upbringing to Western Front frontierism in Apples, etc.: An Artist’s Memoir.

by Gathie Falk with Robin Laurence 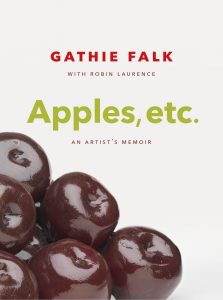 The opportunity to sit down with an eminent artist and have that person share their reminiscences is rare. In Apples, etc. An Artist’s Memoir by Gathie Falk with Robin Laurence, readers feel they are doing just that.

Falk’s “telling” is brave, candid, entertaining, often humorous, and sometimes surprising. She does not delineate any political or feminist perspectives. Nor does Falk offer much self-analysis of her personal experiences or creative endeavours. Her anecdotes primarily highlight the ways in which she overcame poverty and other obstacles in order to achieve emotional wellbeing and artistic success.

Chapters vary from pivotal accounts of her personal life to those of her creative development and achievements via “linked stories.” They demonstrate how adversity, family and friends, loss, spirituality, and stamina have shaped her existence and her work. Critics have identified many of those same themes in her installations, paintings, performance work, and sculptures. Art critic, curator, and writer Robin Laurence’s role in this memoir is not explained. Knowing the extent of her involvement would be instructive from a research perspective.

Falk’s “tough grind” began shortly after her birth in 1928. After losing her father when she was only ten months old, Falk’s Mennonite family (her mother and two older brothers) were impoverished. Later, she had to quit school in Grade 9 to repay the Canadian Steamship Company the monies owed for her parents’ and brothers’ passage to Canada from Russia. 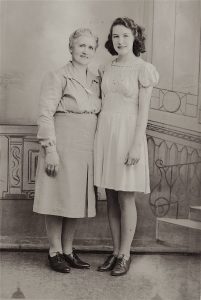 While working and supporting her mother, Falk managed to complete her high school requirements and later graduated from Vancouver’s Normal School. She taught elementary school from 1954 to 1965, while taking summer art courses. In those courses, Falk studied with the likes of Lawren Harris, J.A.S. Macdonald (whom she credits as influencing her the most), and Bill and David Mayrs, among others.

Her mother’s later dementia was another hardship for Falk. Considering the difficulties she endured, Falk’s narrative is never maudlin or self-pitying. Instead, she conveys the determination that helped her to survive. Falk also describes the joy and “blessings” she found in various relationships with colleagues, collectors, critics, family, friends, curators and gallery owners, mentors, and students.

An amusing story in the book involves the theft and return of one of Falk’s ceramic fruit sculptures. A noted Canadian actor “borrowed” the sculpture and later surreptitiously returned the piece.

One of the most troubling revelations is Falk’s recounting of how two older men tried to take sexual advantage of her when she was a naïve young girl. The most astonishing recollections are those of her marriage to a much younger man with a criminal record. After serving his jail sentence, he drained her bank accounts, was unfaithful, and committed crimes (including sexual assaults) that led to further incarceration. They separated after eight months, but she remained committed to him until their divorce five years later. 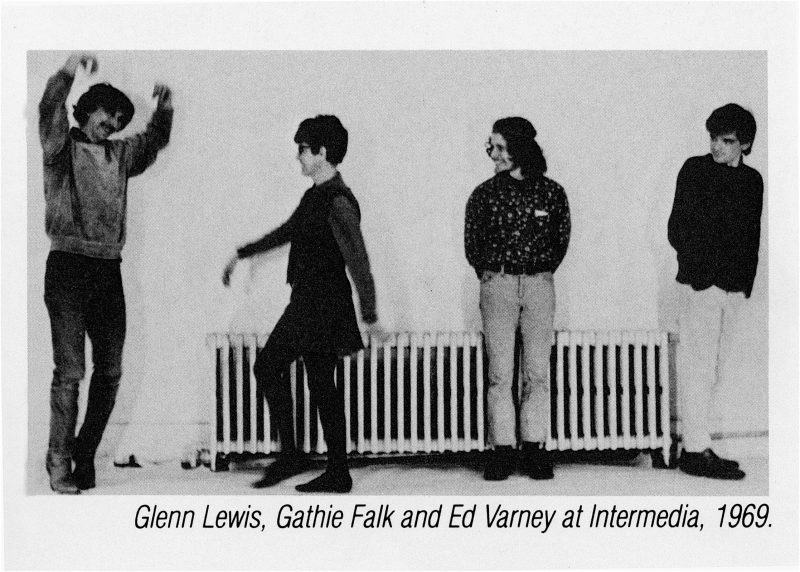 In 1962, Falk began exhibiting her paintings; in 1964, she started to study ceramics; she became involved with performance art in 1968. Sometimes, she worked only with one media, but eventually her art overlapped in unique ways. Falk always drew “on subject matter from overlooked aspects of everyday life.”

In some chapters, she describes particular exhibitions and performance installations and takes readers through her creative processes. While she wanted her performance pieces to elicit emotional responses, critics, curators, gallery directors, and audiences did not always appreciate the work. They sometimes considered the pieces “boring,” outlandish, and “maddening.”

Falk stresses that rather than “outrageousness,” she was seeking new ways of presenting ideas through meticulous design, composition, and rehearsal. Eventually, the professionals and public lauded her performance work. Over the years, she garnered many awards including the Order of British Columbia, the Order of Canada, the Governor General’s Award in Visual and Media Arts, and the Audain Prize for Lifetime Achievement in the Visual Arts, among others. 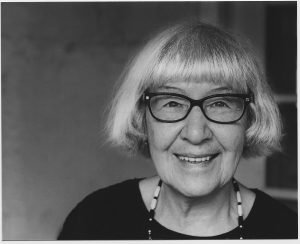 Falk emphasizes, “It’s tenacity that matters,” while outlining artistic processes, inspirations, and problems that she overcame. That information is a fascinating addition to this country’s art history. Fifteen colour images of Falk’s work complement this memoir; twenty-nine black and white photographs are of Falk, her family and friends, exhibitions, performances, and other work.

Falk stresses her creativity is “intuitive” with ideas coming “unbidden — but not whole, not perfect.” She then has to toil “to craft” her vision. She further explains, “The work is absorbing … [and] might be gratifying. But it is not easy.” Even so, in her ninetieth year she is still working because there is “much to do: too many more things popping into my head, demanding to be seen.”

Like her art, Gathie Falk’s Apples, etc. presents a remembrance of survival and commitment by a distinctive artist who continues to study the everyday world and create fresh ways of seeing that world. 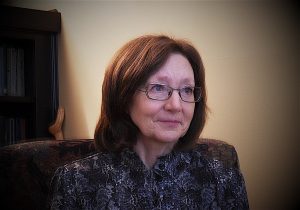 Sheryl Salloum is a graduate of Simon Fraser University. She is a retired educator who taught in the public school and college systems. A freelance writer and independent scholar, she has articles, stories, and book reviews in numerous Canadian publications. Sheryl has also worked as a proofreader and copy editor. Her areas of interest include Canadian art, culture and history, and children’s issues. Sheryl is the author of four books. In 2015, she published Sonia: The Life of Bohemian, Rancher and Artist Sonia Cornwall 1919-2006 (Caitlin Press). The Art and Life of Mildred Valley Thornton (Mother Tongue Publishing, 2011) was a finalist for the Roderick Haig-Brown Regional B.C. Book Prize. Underlying Vibrations: The Photography and Life of John Vanderpant (Horsdal & Schubart, 1995) was a finalist for the Hubert Evans Non-Fiction Book Prize. She published Malcolm Lowry: Vancouver Days (Harbour Publishing) in 1987. 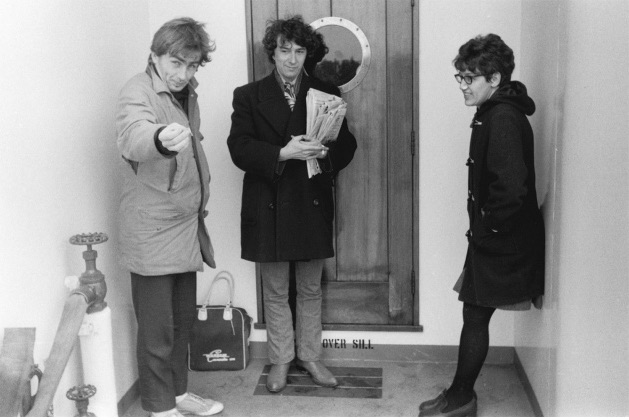 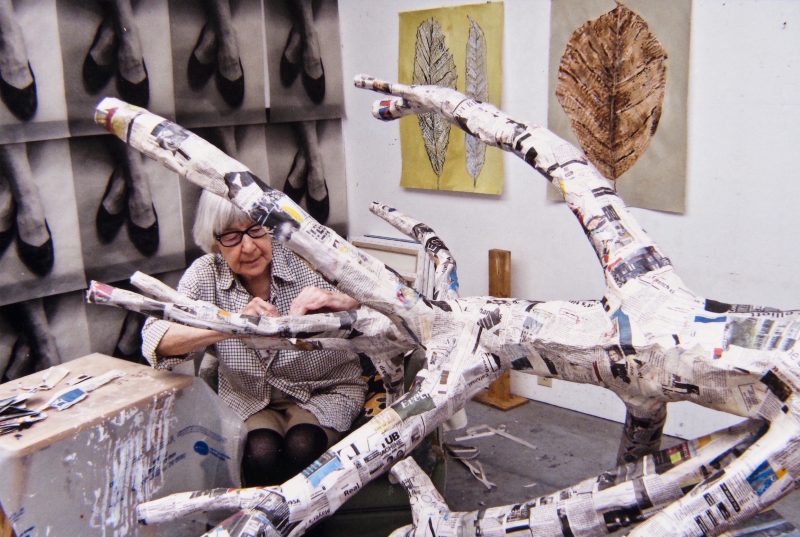