Future primitive: a’ hunting we will go

“When you kill and eat a creature, you are literally integrating its body into yours. You are also integrating the land the creature came from into your body, since their body was entirely a manifestation of that land." — Miles Olson 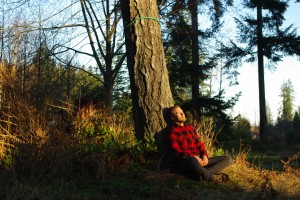 Miles Olson kills game on Vancouver Island using both a bow and arrow and a rifle.

Recently someone paid $350,000 to kill a rare black rhino in Namibia. Reviewer Giles Slade views trophy-hunting as a perverted act by fools too dumb to operate a camera. Here he responds to Miles Olson’s New Age manual for conscious living, The Compassionate Hunter’s Guidebook: Hunting from the Heart (New Society 2014), about hunting for food.

The extermination of the American Bison was made possible by an unholy trinity after the Civil War: the monomania of American greed, Spencer’s flawless repeating rifles, and the miracle of transcontinental rail travel.

No one owned the limitless buffalo herds of the Great Plains. At the railhead, the bison’s carcass was worth $3. The single shell to kill one American Bison cost only 25 cents. This 11-fold profit abruptly ended all empathy for the beasts sparking a bloody Gold Rush that lasted until the plains were virtually emptied.

At almost the same moment, owners of American slaughterhouses invented assembly lines to kill and butcher American cattle in technologically efficient factories of death. It was the assembly line of the abattoir that Henry Ford copied when he first began to manufacture his model T.

So now, if we want to kill for food, can we step outside of the tyranny of our own history and economic structures long enough to experience real life and real living without falling into the Freemen’s stereotype of a redneck man-of-the-woods? Miles Olson thinks so. He knows so. Having learned to hunt for game on Vancouver Island, as well as forage for other food, Olson has evolved a deeply felt “back-to-the-land” philosophy and practice, first explored in his groundbreaking Unlearn, Rewild: Earth Skills, Ideas and Inspiration for the Future Primitive (New Society 2012).

Now his The Compassionate Hunter’s Guidebook takes us back to the connectedness of the craft of individualized hunting when it was still a vital nutritional strategy; and before it was technologized, industrial slaughter.

In doing so, Olson doesn’t pretend to be DeNiro in The Deerhunter. This book is not a nostalgic, romantic fantasy by Fenimore Cooper, or a terse ideology of masculinity by Hemingway. Olson is connected to his practice. He understands its meaningfulness and fulfillment. He knows why we need it, and he brings it to our attention with humility.

Olson was initially going to call this book The Ethical Hunter’s Guidebook, “an exploration of and guide to hunting from a conscious, ethical perspective,” but he changed his mind and altered the adjective. “Ethics are by definition products of the rational mind,” he writes, “logical conclusions about the nature of reality from which we build our sense of right and wrong. They are matters of the intellect…”

What Olson is seeking in the woods in the vicinity of his home in Courtenay has little to do with intellect. It’s more like Zen. He asks us to watch and engage with our emotions and spirit:

“To adequately address the depth of the subject, [my manuscript] had to become a guidebook for compassionate hunting,” he writes, “for those who hunt for any or all of the above ethical and economic reasons, but who also feel a sense of deep respect and reverence toward their prey, who are interested in approaching hunting (and all of life) as something sacred.”

The Compassionate Hunter’s Guidebook is a book about the ideology, empathy and spirituality of craft, and craft is what technology replaces. According to Richard Sennet’s wonderful book, The Craftsman, it is the one dimension of our modern world that is ignored and under-nourished. Its absence leaves us considerably poorer than our predecessors. In Shop Class as Soul Craft: An Inquiry into the Value of Work, Matthew Crawford has explained why we become depressed without the demands of an interesting task. Unlike all other creatures, we are creatures of craft and culture. Craft is how hominids adapt to nature.

Olson understands such things, inherently, but he does not proselytize or preach. Instead he reports that to kill for one’s one meat, consciously, can be a spiritual process by which we can “[get] to something … through connecting with … food. [You might understand] our separation from the living world.

“When you kill and eat a creature, you are very literally integrating its body into yours. You are also integrating the land … [the] creature came from into your body, since their body was entirely a manifestation of that land. This is an amazing, dynamic that … lies at the … heart of … people’s desire to connect to the land … through gardening, hiking, foraging, crafting or hunting:

“[It shatters] the boundary between self and other, human and nature; [and pierces] the illusion of separation that … defines our culture.”

We can see that first starving herbivorous hominid desperately sampling carrion on the African Savanna. We can see his or her descendants accumulating an ever-expanding array of strategies connected to the stunning new ability to make-things-dead.

We can see how the craft of making-things-dead evolves into ritualized genres of public art whose controversial remnants are still among us in the forms of bullfighting and fox hunting.

And so some thing that were obscene to us can now been viewed with new eyes. Miles Olson’s The Compassionate Hunter’s Guidebook takes us back to the connectedness of the craft of individualized hunting when it was still a vital nutritional strategy; and before it was technologized, according to reviewer Giles Slade.

An encounter with death is a very rare thing in our society. Some claim it is the constant reminder of mortality that enriches life and makes it poignant. This certainly seems to be the case in the developing countries in which I’ve lived. You are surrounded by death and people seem more alive.

Here, in North’s America’s sterile absence of death, we use recreational drugs or the empty thrill-experiences of extreme sports to remind us that we are vibrant, mortal creatures, not replaceable cogs in an economic Matrix. Nowadays children’s burning ambition to live full-tilt lives is somehow quickly displaced into online Avatars. No one actually runs away to join the Foreign Legion any more. Instead, they buy Halo.

Like an antidote, Miles Olson reminds us that even now… “Bucks are roaming the woods chasing the scent of fertile Does with little regard for anything other than sex and establishing dominance. Does, likewise, are less cautious as they start to ovulate … their bodies fill with excitement … Their changing scent … bring[s] … potential lovers.

“For a time this annual dance of courtship …eclipses all else … [and] the deer are possessed by an insatiable urge. As I sit shiftlessly in the woods, the feeling is palpable … there is an overwhelming sense of activity, electricity and excitement … Even if I don’t see any deer today, I’ll still have harvested a deep feeling of groundedness.”

The Compassionate Hunter’s Guidebook does what any good book should do. It takes you into another world and makes you understand new people.

I am a writer, not a hunter. I enjoyed the book immensely. I did not think I would.