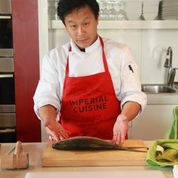 A Taste of Empire
Written and Performed by Jovanni Sy
Boca del Lupo
Granville Island Market
May 22 – 25 on Granville Island; May 31 and June 1 at the Richmond Arts Centre

Although A Taste of Empire is limited to one character who cooks a fish for an hour-and-a-half, in terms of its geographical and political scope it is one of most expansive evenings of Vancouver theatre seen in recent memory.

It begins with the canned voice of one of those overly-enthusiastic television show announcers whipping up enthusiasm for the entrance of a cooking show star, Chef Maximo Cortez—Kitchen Gangsta! Ludicrous slides of this self-satisfied celebrity chef are part of the advance hype.

Chef Maximo has an extensive product line. His chain of Maximart grocery stores do not specialize in local produce. Instead this Messiah in an apron unabashedly favours Imperialist Cuisine—food made cheaper and more plentiful by mass production methods combined with political oppression.

But wait. The wunderkind Chef Maximo can’t make it! Our cooking-with-gusto guru has been called away to cook for one of his celebrity clients! A la The Sorcerer’s Apprentice, an apologetic underling–a sous-chef played by Jovanni Sy–must do his utmost to simulate the presentation of the master. At first it appears our substitute chef is the sort of sycophantic underling who would have followed Jim Jones to Guyana. He has drunk the kool-aid.

Chef Jovanni is not at liberty to expose the identity of any of Chef Maximo’s private customers, but he does say, “I can tell you that Bono just loves his empanadas.”

Even though he hasn’t had a day off work for years, Chef Maximo’s primo lackey is ever-grateful to be granted proximity to greatness. That time Chef Maximo locked him overnight in the freezer as punishment, well, he deserved it.

And so humble Chef Jovanni proceeds to emulate his master by making a Filipino dish from Northern Luzon called “Rellenog Bangus” (stuffed milkfish). The first clue that we can expect something more wide-ranging than comic satire occurs when Chef Jovanni confides he has been in the service of Chef Maximo ever since he was rescued from a Romanian orphanage at age ten.

Hey, this guy certainly doesn’t look Romanian… Born in the Philippines, Sy–who is the Artistic Director of the Gateway Theatre in Richmond for his day job–is an international Canadian and A Taste of Empire is as international as you can get.

It turns out A Taste of Empire is largely about looking beneath the surface of things.

As Chef Jovanni proceeds to dissect the origins of his monkfish recipe, he describes the Ita tribe that traditionally caught the fish. Tongue in cheek, we are enthusiastically told it is surely a good thing that Ita fishermen were supplanted by a corporation called Imperial Seafood. It is a good thing fish farms have increased the yield more than a thousand-fold. “Everybody’s a winner!”

Sy’s cooking narratives are spiced with history. Thousands of islands off the coast of Asia were named the Philippines by Ferdinand Magellan in 1521 to honour King Phillip the Second of Spain. You already knew that, right?

After the Spanish generously brought “the gift of eternal salvation and the gift of Christian modesty” to the heathens of the Philippines in 17th century—as they had done for both Americas—there were fifty years of American domination in the wake of Teddy Roosevelt’s propaganda-inflated victory in the so-called Spanish American war (actually it was the Cuban-Filipino-Spanish-American War but the people upon whose homelands the wars were fought didn’t get equal billing).

Then came the Japanese Occupation…

It has all worked out for the best. Our chef gleefully outlines how conquering cultures have enhanced the diversity of global cuisine. Did you know the tomato became popular in Spain only after seeds from Central America were first taken to the Philippines? And the Americans gave the Filipinos spam and Heinz ketchup?

Did you know 15% of Filipinos now have diabetes?

It takes Sy ninety minutes to prepare one dish that will ultimately be shared by the audience. Even someone who is foodie-phobic cannot help but marvel at the deft intricacies of his skill. This is not an actor pretending to be a chef; it’s a chef doubling as an actor.

First he massages the fish scales, making sure he doesn’t puncture it. He loosens the flesh from the skin with a special knife. Then he carefully squeezes out the innards through a small slit. The fish meat is steamed on a banana leaf while the carcass is marinated in a soy sauce marinade.

Then the fish meat was added to the sofrito (garlic, olive oil, onion, tomato, raisins mixture) and cooled. At one point, he literally turns the fish outside in, the way one would unravel a sock from the dryer. The various fixings are all piped back into the empty fish skin, dredged in flour and panko breadcrumbs and fried golden, to be garnished with a tomato rose.

During this process we learn that most of the components of the Filipino milkfish recipe that are seemingly Spanish—such as the sofrito marinade, or stuffing—are derived from products that were originally Asian. And did you know 80% of the world’s garlic comes from China?

While cooking, Sy delivers a seamless monologue that doubles as a history lesson and a parody of the cooking show genre. The more he espouses the benefits of “imperial cuisine,” essentially defending unbridled capitalism, the more we are being prepared for an ending that cannot be revealed.

Along the way there are unexpected asides about the nature of torture—specifically the evolution of waterboarding by the Americans—and yet somehow Sy manages to avoid didacticism by maintaining his façade of gleeful diligence. Sy is not playing multiple characters; he is multi-tasking. It has the same effect.

The show hits home when Chef Jovanni introduces us to Carlos, the Mexican tomato picker, who arrives in B.C. courtesy of the federal Seasonal Agricultural Workers Program. Similarly vulnerable to exploitation are the thousands of Filipina nannies who come to B.C. under the federal Live-in Caregiver Program.

Hey, we thought this show was supposed to be about cooking…

Fascinating,  funny, sophisticated and delightfully unpredictable, Jovanni Sy’s A Taste of Empire is easily one of the most engaging nights of original theatre to be seen in Vancouver in recent years. The extent to which this entertaining amalgam has anti-racist underpinnings is one of the fascinating aspects of the piece—clowning as a socially acceptable alternative to anger.