From Irish Sea to Salish Sea

At 81, Peter McMullan catches and releases his 352-page Casting Back. 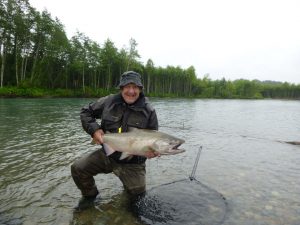 Peter McMullan verifies fisherfolk can be a fervent, obsessed breed, according to Ian Kennedy

A sublime casting director gathers sixty years of fish lit with conservation concerns always on his mind. “How fortunate we are to live in this part of the world, link ” he says.

REVIEW: Casting Back: Sixty Years of Fishing and Writing

In Casting Back: Sixty Years of Fishing and Writing, the former editor of the Nanaimo Free Press, Peter McMullan, conveys his passion for fly fishing in his native Ireland and on the rivers of coastal and interior B.C. Reviewer Ian Kennedy explores McMullan’s love of angling, the mystique of fly fishing, and the abiding appeal of the genre of books about fishing.

OVER HIS ILLUSTRIOUS CAREER as a news and sports journalist and as a corporate communications manager, Peter McMullan has written thousands of articles and press releases. Of all of these, however, his most treasured remain the ones he wrote about fishing. Now in his eighty-first year, McMullan has gleaned the best fishing articles he wrote for newspapers and for prestigious angling magazines and websites in Canada, Britain, and Finland, and melded them into an eclectic and entertaining 352-page volume, Casting Back: Sixty Years of Fishing and Writing.

McMullan began fishing for “coarse fish” — bream, roach, trench, and perch — while at boarding school in England. After a year studying in Victoria in the mid-1950s, he returned to his native Northern Ireland and landed a position as rugby and fishing correspondent for the Belfast Telegraph. That led him to travel all over Ireland writing about the two sports he remains most passionate about, fishing and rugby, and persuading fine sport fish such as brown trout and Atlantic salmon to visit the end of his fly lines.

For the next sixteen years he wrote countless articles about fishing — even spending time on a commercial herring trawler on the Irish Sea and going after big game sharks off the south coast. Like any good Irish storyteller, he has produced some great yarns of rivers fished, of friends made, and of Irish hospitality. One of the forty-five pictures in his book underscores this, showing the rim of a thick, black pint glass of Guinness surrounded by red and yellow fishing flies. One particular story from 1969 illustrates how the passion for angling superseded even loyalties and religion at the height of the “Troubles.” McMullan and his family made a 200-mile trip south trip across the border so that he could report on a fishing competition in Belmullett, County Mayo, in the Republic of Ireland. That weekend, writes McMullan,

Belfast was in the grips of a particularly dreadful outbreak of rioting and burning … and by Saturday night, the deadly shooting had started .… and that evening when we planned to drive back to Belfast, the local angling club secretary made it very clear that he simply would not permit us to go in any circumstances.“It’s much too dangerous,” he told us, “so I have arranged for you, your wife and son to stay in my house until things settle down.”

Remember he was Catholic and I a Protestant, meeting for the first time only 24 hours previously as complete strangers. That’s fishing in Ireland.

The first few chapters feature articles of angling for river-run Atlantic salmon. McMullan vividly describes the lure of catching big salmon full of power and guile on rivers with such lovely names as the Finn, the Ballinderry, the Moyola, the Owenea, and the Blackwater.

In 1971, however, when McMullan immigrated to Nanaimo to become editor of the Nanaimo Free Press, he began fishing for Pacific salmon, steelhead, and other fine fish on such rivers as the Cowichan, the Stamp, the Kitimat, the Babine, and the Englishman, and his writing became even more appealing on these streams that were new to him.

If the B.C. Tourism Board has an award for promoting this province, McMullan should be in line for that prize. His articles extol the virtues of angling here much in the same tradition as the legendary Roderick Haig-Brown before him. McMullan explored the province far and wide and wrote with gusto of the thrills experienced while fishing each new river. He takes us on a virtual tour through the province from Langara Island, Haida Gwaii, and Babine Lake in the north to the Cowichan and Little Qualicum rivers in the south. “How fortunate we are to live in this part of the world,” enthuses McMullan.

Not only does he engross his readers with some memorable struggles of landing the big ones, he also delves into the whole mystique of what lures anglers to the sport, culture, and beauty of fine reels, rods, and flies.

With conservation always in mind, he continually stresses the use of barbless hooks, fishing limits, and salmon enhancement programs, but he doesn’t shy away from controversial topics such as the impact of sea lice caused by fish farming.

He continually reminds his readers that the catching of a fish is not necessarily what fishing is about. “Catching fish is part of the sport, but it should never be allowed to become the dominant issue. The true angler should derive just as much satisfaction from the beauty of his surroundings, from the absolute sense of freedom always associated with fishing in wild places,” writes McMullan.

He derives as much enjoyment from reading and writing about fishing as he does from the sport itself, and he intersperses his articles with references to an eclectic genre of books about fishing. Anyone interested in reading about fishing will value McMullan’s ten-page bibliography, including a classic angling book published in 1808, Captain T. Williamson’s The Complete Angler’s Vade-Mecum: Being a Perfect Code of Instruction on the Above Pleasing Science, which graces McMullan’s personal library. McMullan adds a passionate chapter to a genre that has been around for a very long time. In Casting Back, McMullan offer hints on flies, lures, and techniques that have brought him success, but more than this he offers a passionate examination of why anglers love their sport. “Certainly it would be a lot cheaper for me to buy the fish that I catch from the whiteness of a fishmonger’s slab,” he points out, thus avoiding the early morning starts and the inclement weather that fishermen seem not to heed.

McMullan repeatedly demonstrates that ardent fisherfolk are a special, fervent, obsessed breed, often fanatical in pursuit of their sport. As a bonus, he even takes readers on a trip to New Zealand to explore the fishing there.

Introduced by his frequent fishing companion and conservationist, the Globe & Mail’s Mark Hume, this is a book anyone with even the slightest interest in fishing will enjoy. Casting Back: Sixty Years of Fishing and Writing will serve as a worthy addition to any fine fishing-book collection in Canada or abroad.