From tea set to war canoe 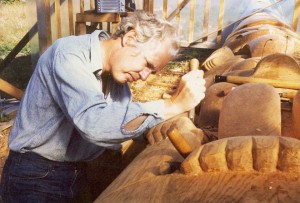 Before he knew about his Haida heritage, Bill Reid turned to carving ship models and miniatures at the age of 12.

Now Bill Reid Collected (D&M 2016) by Martine J. Reid reveals the only surviving work from that period is a tiny Victorian tea set that he made out of white chalk, coated with pink nail polish, and gave to his younger sister who kept it nestled on a bed of cotton balls in a pocket-sized matchbox.

The miniature tea set is one of 126 art works presented in the largest chronological collection of colour photographs of Bill Reid’s art pieces to date—including jewellery, paintings, serigraphs and large carvings. Martine Reid, his second wife, introduces a three-tiered classification sequence for his works: Pre-Haida (1948–1951), Haida (1951–1968) and Beyond Haida (1968–1998). Martine J. Reid was married to Bill Reid for the latter half of his life when he created most of his monumental art works such as “The Spirit of Haida Gwaii” (also known as “The Jade Canoe” at the Vancouver International Airport) and “The Raven and the First Men”, both of which have been featured on the Canadian $20 bill.

In Bill Reid Collected, Martine Reid recalls that Reid was raised by his Haida mother, a residential school survivor who hid her family’s First Nation roots. “It would take Reid a lifetime,” she writes, “to unearth what his mother had been forced to bury.”

Admission to the event is free, refreshments will be served, and all are welcome. In addition to the launch of Bill Reid Collected, this event will mark the opening of Bill Reid Creative Journeys, an exhibition at the Bill Reid Gallery. Martine J. Reid also edited Paddling to Where I Stand: Agnes Alfred, Qwiqwasutinuxw Noblewoman (UBC Press, 2004), the first autobiographical portrayal of a Kwakwaka’wakw matriarch. As a co-author, Kwakwaka’wakw linguist Daisy Sewid-Smith translated the memoirs of her grandmother Agnes Alfred (c.1890-1992), a non-literate storyteller and noble Qwiqwasutinuxw woman of the Kwakwaka’wakw Nation who experienced a century of change within her community. Martine Jeanne Reid was married to Haida carver Bill Reid, who died in 1998. She also produced an educational children’s colouring book, Myths & Legends of the Haida Indians of the Northwest: The Children of the Raven, illustrated by Nancy Conkle, that retells Haida stories.

Martine J. Reid is Honourary Chair of the Bill Reid Foundation, which created the Bill Reid Gallery of Northwest Coast Art (BRG) in Vancouver, B.C. in 2008. She was Director of Content and Research, and Curator at the BRG from 2008 until 2012.

Review of the author’s work by BC Studies:
Bill Reid and the Haida Canoe
Carrying on Irregardless: Humour In Contemporary Northwest Coast Art by Peter Morin, Martine Reid and Mike Robinson, editors

Myths and Legends of Haida Indians of the Northwest: The Children of the Raven (Santa Barbara, California: Bellerophon Books, 1988).