From severed to untethered 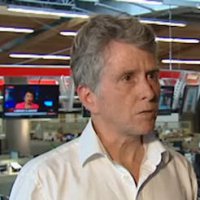 In 2013, cartoonist Dan Murphy himself became a newsmaker when his video about Enbridge was censored by his brass at The Province. He since resigned from the Vancouver tabloid.

Dan Murphy started his West Coast cartooning career doing political cartoons for The Western Voice. In his 29 years with The Province, he has moved increasingly towards the mainstream, delighting in depicting B.C. manners with his illustrated column Mr. Pundit. The titles of his two books of cartoons are indicative of this transition. He first published 101 Uses for a Severed Penis (Serious Publishing, 1994). Oddly published from Nova Scotia, his charming collection of classic B.C. attitudes and behaviours is You Might Be From British Columbia If… (MacIntyre Purcell 2015). Journalist Geoff Olson’s succinct foreword to this collection of satirical mirth makes a claim that is only refutable if you are old enough to remember the Norris cartoons: “…to date no humourist has summed up this beautiful, baffling province with such an economy of line and wit, in one volume. If you catch every cryptic (and cryptid) reference in these cartoons, you will no for certain you are a true British Columbian.”