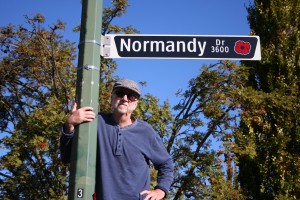 Trade magazine journalist and former Vancouver Sun reporter Don McLellan grew up at this address in Renfrew Heights, a neighbourhood bordered by East 22nd Avenue, Rupert Street, Grandview Highway and Boundary Road in Vancouver. In the late 1940s, a hillside was cleared off to make way for the Renfrew Heights Housing Project for War Veterans. The lives of the people in those bungalows are basis for McLellan’s first fiction collection, In the Quiet After Slaughter (Libros Libertad 2009), containing 17 stories, 13 of which first appeared in literary magazines. The collection was a 2009 ReLit Award finalist.

“At the conclusion of the Second World War,” Don McLellan recalls, “Canadian combatants returning from Europe exacerbated an already-chronic housing shortage. In Vancouver, veterans and their families were billeted in downtown hotels. Hallways served as playgrounds, lobbies as nurseries. Indignant returnees halted traffic with their chagrin, prompting authorities to borrow an untested solution from the United States: public housing. It’s 1956, and the author, under a fashionably faux Davy Crockett coonskin cap, and big brother Bill, take aim at now-forgotten adversaries in the backyard of the family home at 3432 Mons Drive, part of East Vancouver’s Renfrew Heights Housing Project for War Veterans. The neighbourhood was constructed on a hillside in the late 1940s, with memorable views of the North Shore mountains and an always-expanding downtown. Most of the bungalows went to former combatants who had seen plenty of frontline action and had produced at least two kids – the reason, the author would learn, for his highly anticipated arrival in 1951. Pk-k-ew! Pk-k-ew!

“In a single summer a forested hillside on the city’s eastern periphery was cleared and the first of hundreds of look-alike bungalows constructed. The newspaper ran a photo of a bulldozer felling the first sacrificial tree. Demand for the rental units outstripped supply, so the coveted homes were let to those who’d endured considerable frontline action. Successful candidates were also required to have at least two children, encouraging action amongst hopeful applicants of a more welcome sort. An appropriate moniker for the residential development suggested itself nine months hence: Diaper Hill.

“Streets were named after memorable battle sites from both world wars, villages such as Normandy, Vimy, Dieppe, Anzio, Mons. …In the first few years of the nascent neighbourhood the homes were rentals, with Catholics unnecessarily assigned to one side of the street, Protestants the other, echoing a stubborn, Old Country division. In time the properties were offered to vets who could cobble together a down payment. When prices rose, some sold their homes to the non-veteran public, dramatically transforming the cultural hue of the neighbourhood. I recall my father grimly eyeballing a newly arriving homeowner, an Italian. (Italy, remember, had been on the losing side of the war.) ‘Ten years ago,’ said my father, who had served in the Navy, ‘they would have paid me to shoot him.’ Instead, the two became good friends, my father doing Cosmo’s taxes at our kitchen table, Cosmo supplying the homemade vino. I don’t think there are many countries where such a reconciliation would have been possible.

“Each narrow corridor had several homes fitted with a wheelchair ramp extending to the sidewalk – at least to where the sidewalks were meant to be. (Homes tenanted by the shell-shocked, of which there were many, featured no telling characteristic.) Until financing for paving was secured, rainfall turned roadway and footpath into muddy fjords. Postal workers refused delivery, a slight later avenged by a parliament of snappy canines. In the 1950s and ’60s Falaise Park was the centre of the universe for many a sports-obsessed Project youngster, with its generous layout of ball diamond, gridiron, soccer pitch and toboggan run. “My friend next door, Jim Kilner, became a professional baseball player,” recalls the author. “My friend across the street, Al Dick, played pro hockey in Europe for 10 years. I served as a kind of sparring partner for both of them.”

“By the new millennium few of the bungalows or their original inhabitants stood erect. Folks began referring to the development as Widows’ Hill. To many who live there these days, the Renfrew Heights Housing Project for War Veterans, where many of the following fictions are set, is remembered, if at all, as a quaint municipal curiosity. To original residents, however, the Project was more than a home. This modest neighbourhood was a sanctuary, a place to reassemble war-weary lives in the quiet years after slaughter.” Don McLellan’s second collection is Brunch with the Jackals (Thistledown 2015).

Independent reviewer and Vancouver historian Sheryl Salloum has responded, “Brunch with the Jackals takes readers to uncomfortable places in foreign locales and the east side of Vancouver. These include the ‘troubles’ in Ireland, a war-ravaged Asian country, and migrants’ experiences with human smugglers and an impassive Canadian bureaucratic system; as well as the unforgiving realms of gangs, junkies, murderers, and terminal illness.

“His stories are profoundly dark, spare, unforgettable, and finely honed. As with a good mystery or psychological thriller, after the last page the reader wishes for more of this bold author’s neo-noir stories. Brunch with the Jackals is an arresting second book from an intriguing literary voice that highlights emotional, physical, and psychological shadows.”

Don McLellan has worked as a journalist in Canada, South Korea and Hong Kong; his short stories have been published in Descant, Joyland, and the Dalhousie Review. His work has been nominated or short-listed for a Western Canada Magazine award, a Tabbies International Editorial and Design award and a Kenneth R. Wilson Memorial (business writing) Award.