Kunduz war crime must be addressed 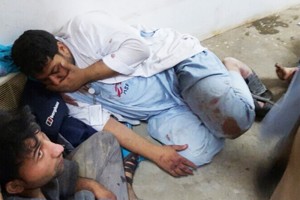 Hospital staff in shock in Kunduz after sustained bombing on October 3, 2015. © MSF

We asked our columnist Anne Cameron to respond.

At 2:10 a.m., its trauma centre in Kunduz, Afghanistan, was hit several times during a sustained round of aerial bombing. Twelve MSF staff members and ten patients were killed, three of whom were children.

MSF was forced to evacuate staff and suspend activities in Kunduz. MSF’s hospital was the only facility of its kind in the whole northeastern region of Afghanistan, providing free life- and limb-saving trauma care. After intense fighting broke out in Kunduz last Monday, MSF expanded the facility to cope with the influx of wounded, from 92 beds to 150. Almost 400 wounded people were treated at the centre in the week prior to the bombing. Staff were working around the clock.

MSF has yet to receive any explanations or assurances that would provide confidence to safely return. MSF is demanding a full and transparent investigation by an independent international body to determine what happened and why.

MSF is calling on all warring parties to respect civilians, health facilities and medical staff, according to International Humanitarian Law.

Meanwhile citizens around the world are calling for an independent investigation–including our BCBookLook columnist Anne Cameron.

MSF’s international president, Dr. Joanne Liu has requested media around the world to share this statement to the public, or individuals can spread the link on social media networks using the hashtag #IndependentInvestigation.

The U.S. government has altered its story as to culpability four times in the four days since the incident.

Where is the outrage?

A photo of a dead child on a beach in Turkey and the uproar from people near and far was sufficient to shift even our somewhat moribund noble leader from his previously entrenched position of inaction on the Syrian refugee crisis front. One dead toddler and entire countries surged forward to at least accept, if not exactly welcome, refugees and migrants fleeing a war in which Canada, some suggest, has business participating.

A spokesman for U.S. forces in Afghanistan has said the strike “may have resulted in collateral damage to a nearby medical facility.”

May have?  May have, as in possibly, or perhaps, or even maybe?

The photos leave no doubt at all.  There is damage, horrible damage, the main building of the hospital is completely wrecked and the rubble stained with the blood of staff and patients.

There is no possibly, no perhaps, and certainly no maybe.  It happened.  And it wasn’t “collateral damage.” It was slaughter, it was murder, and it is a war crime.

How much of the finite resources of the world get dumped into the destruction and agony of war?  What good could be done if that amount of money was directed toward improving things rather than turning them into rubble stained with the bits, portions, morsels of what were once living people?

The hospital did not discriminate, it took in any sick and wounded from whichever or every side in this mad conflict.  There were no combatants in the place, just those who needed help and those providing help.  Is that why it was targeted?

Are even hospitals to be forced to take “sides”, turn away the sick and wounded who do not agree with or at least submit to the dictates of one particular “side”?  What’s next?  Schools?  We’ll blow your kindergartens to shreds if you don’t teach consumerism and capitalism?

The people in that hospital contacted both “sides” to report they were under attack.  It took at least a half hour for the assault to stop.  What must it have been like for those trapped in a burning building for that half hour as more rockets landed, more explosions rent the air and more people, some of them little children, were terminated.

And what are we going to do about it?

I gotta tell you, weeping doesn’t cut it.  Mourning is no longer enough.

We have to find a way to cut off the money which buys the weapons which are used for war.

If this noble leader and that noble leader have a disagreement which can’t be mediated, then let those two arstles strip to the waist and go at each other fang and claw, winner take what honour he can find.

And how come these arstles don’t have to answer to a Nuremburg type trial?

2 Responses to “Kunduz war crime must be addressed”