Coincidental with the 2015 Women's World Cup, Laurie Ricou has recalled his 35 years of coaching the beautiful game for a fragmented memoir, Foot Notes: Telling Stories of Girls' Soccer (Oolichan $12.95). 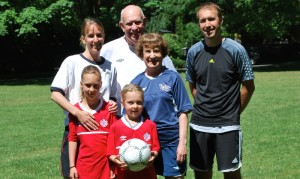 Ricou has already seen some of the women’s World Cup matches, taking in a doubleheader at BC Place. “The Japan-Switzerland game was sensational,” he reports, “And the Sweden-Nigeria match from the Peg was great viewing.”

Since 1979, Laurie Ricou–a non-soccer player and a professor emeritus from the UBC English Department–has coached various levels of girls’ soccer, making him a co-recipient of a Youth Coach of the Year Award from the B.C. Soccer Association.

Simultaneously, his wife, Treva Ricou, has long been an avid soccer player since her thirties, continuing to play competitively into her seventies. His children Marc and Liane have played since they turned six. Noting the escalating costs for parents to enable their children to participate in amateur soccer, Ricou diplomatically remarks in his book, “I can’t think of many reasons why a parent who pays for swimming lessons, Tae Kwon Do and ballet, should not pay for soccer coaching. However, there’s no doubt that a change to an employee/employer nexus changes a lot. Maybe this book hums some nostalgic farewell to the amateur coach, and celebrates the culture of volunteerism that sustains.”

Sprinkled with literary references to Canlit titles, Ricou’s potporri of memories and observations revealing a thoughtful and careful personality.

“Some feminists claim that the term ‘girls’ is inappropriate,” he writes, “even to refer to teenagers, because it connotes immaturity, diminished intellect, the girly and the girlish, modelled on a Barbie doll. But when a coach is calling a group of soccer players together, other than such collectives as ‘team’ or ‘blue,’ it still seems the best term. ‘Ladies,’ which many coaches use, is loaded with way more pejorative echo than ‘girls,’ and certainly (consider ‘ladylike’) does not conjure athletic prowess.

“‘Guys’ can sometimes work player-to-player, but will seem arch coming from a male coach. ‘Young woman’ or ‘women’ is fine, preferred, for an indirect reference, but it would not work for getting a group to listen up.

“I used to worry about this terminology, as this bit of angst will convey, but not much anymore. Girls is what girls prefer.”