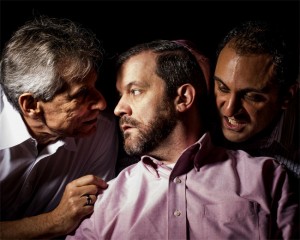 Here in wannabe-world-class Vancouver we live in such a bubble of pleasure, prosperity, plenty and beauty that many citizens are now poised to jettison an affable mayor for his sins of choosing to take leave of a marital partner and foisting too many hardly-used bike paths onto the SUV-sated populace, making motorists feel caught and persecuted in a shrinking maze that was created by devious, out-of-control city planners who are pursuing the conceit of greenness to the detriment of personal liberty.

That’s constitutes politics where we live.

Meanwhile, beyond The Bubble that is Vancouver, there exists,  far, far away, somewhere beyond the Rocky Mountains, somewhere over the rainbow, a sometimes-talked-about but largely irrelevant alternate universe called The World.

The chief delight or value in Arthur Milner’s tense drama Facts is that its tempestuous dialogue succeeds in bursting The Bubble. For an intermissionless 75 minutes or so, we get to wade into the quagmire of Israeli-Palestinian relations and get lost in enmity;  we become soiled with that mixture of fear, hatred and in-bred loathing that we denizens of The Bubble prefer to euphemistcally call the Middle East conflict. In this three-hander directed by Adam Henderson, we get our feet dirty with politics that can be deadly.

The action is a fictional follow-up to a real murder.

In 1992, an American archaeologist named Dr. Albert E. Glock was shot and killed in the West Bank by a masked gunman. Glock was born in Idaho. His parents were Lutherans. As a Lutheran missionary, Glock came to Palestine in 1962 to undertake excavations for archaeological purposes. During his seventeen years in Jerusalem and the West Bank, Glock became head of the archaeology department of Birzeit University in Palestine, near Ramallah.

As a  professor, Glock persuasively argued in an academic journal that archaeologists working in the so-called HolyLand had done a great disservice to the Palestinian people by over-emphasizing Biblical research, thereby enabling the Israeli occupation of the West Bank and Gaza Strip by devaluing the history of most of the people who lived there. In 1992, Glock also published All That Remains – The Palestinian Villages Occupied and Depopulated by Israel.

Naturally it was assumed Glock was murdered for his pro-Palestinian views. But who did it?

Milner’s play Facts is set entirely in the interrogation room of an Israeli facility in the West Bank. Here an Israeli police detective played by Jerry Wasserman confers with his Palestinian police detective counterpart played by Mehdi Darvish. In response to pressure from the Americans, who are not pleased to see the murder of an Idaho-born professor remain unsolved, the detective duo must at least go through the motions of sharing their perspectives on the case.

Their temperaments contrast as much as their politics. Whereas Wasserman’s detective named Yossi is tightly-wound, aggressive and surly, Darvish’s detective named Khalid is, by nature, soft-spoken and far less combative. Neither makes any pretence of trying to like or respect one another. That’s just the way it is. It makes no difference to the pair that Yossi is an atheist. They have been programmed by their societies to disagree.

Milner’s dialogue convincingly captures this taut, inherent discord.  Yossi is particularly disparaging to the Americans. “Americans idolize facts!” he complains. He adds, “Americans believe if you have enough technology you can solve all the crimes.”

On the West Bank, the undercurrents of history run deep. Facts are merely bugs upon the lily pads of daily life. Yes, of course, the police should investigate this murder. But it’s the pond of history itself that is the source of evil. From afar, American presidents continuously fail to appreciate the extent to which history determines the course of daily lives. To satisfy the Americans who want facts, the two detectives will go through the motions, but their alliance as investigators is more distasteful to them than the crime they are obliged to discuss.

Milner has changed the name of Glock to Gordon Phillips to provide some artistic license. We learn the murdered man went to court as an expert witness to testify that–according to a lack of archaeological evidence–the Hebrews were never in Egypt, King David never existed and, in essence, much of Zionist history is bogus. If Science is to serve as the basis for truth, rather than religious beliefs, the question arises: If there was never a Zionist kingdom, what is the justification for Israel to exist?

The two detectives are obliged to interrogate the only possible suspect, a young Israeli police officer, Danny Rakoff, who has radical Zionist beliefs. As played by James Gill, the suspect soon alienates both inspectors. It makes sense for Khalid to feel estranged from Rakoff’s belligerent racism immediately but Danny even manages to make Yossi hate him by claiming that Yossi’s atheism prohibits him from calling himself a real Jew.

The two detectives rough up their suspect, for little gain, and Yossi confiscates his gun. They have little proof that Danny could have killed the archaeologist beyond the circumstantial evidence that Danny was known to have been in the area of the crime when it was committed.

It’s a theatrical rule of thumb that when a gun is introduced on stage, sooner or later it has to go off. After a frustrating interrogation, Rakoff is let go. But he forgets to take his gun with him. When he returns to the interrogation room to ask for his gun back…

In a theatre-in-the-round set-up, it’s hard for actors to play to the audience so the intensity of the acting in Facts is appreciated from distance, a bit like watching colourful fish in an aquarium. But Facts is much appreciated nonetheless for its ardent vigour and its tough talk. As the late Larry Lillo once said to me about Bent, “Hey, it’s about something!!”