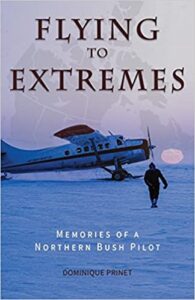 “I had arrived in Canada a broken young man from an old, conservative and academic family, and this flying to extremes turned me around and saved my life.” — Dominique Prinet

After shaming his family in the early 1960’s by failing the entrance exams to one of France’s top universities, the École Normale Supérieure, Dominique Prinet became depressed. “It was either jump off a bridge or renounce the world as I knew it,” he writes in his memoir Flying to Extremes: Memories of a Northern Bush Pilot (Hancock House $24.95).

“I decided to retire from civilization and hide in the deep forests of British Columbia,” he adds, where he intended to become a logger.

He never did take up the logging trade. Rather, in 1965 he capitalized on his flying experience in France and found a job as a pilot and flight instructor in B.C. Not long afterwards, Prinet was offered a job in the Northwest Territories flying for Yellowknife-based Gateway Aviation. He fell in love with the challenge of flying bush planes in the Arctic. 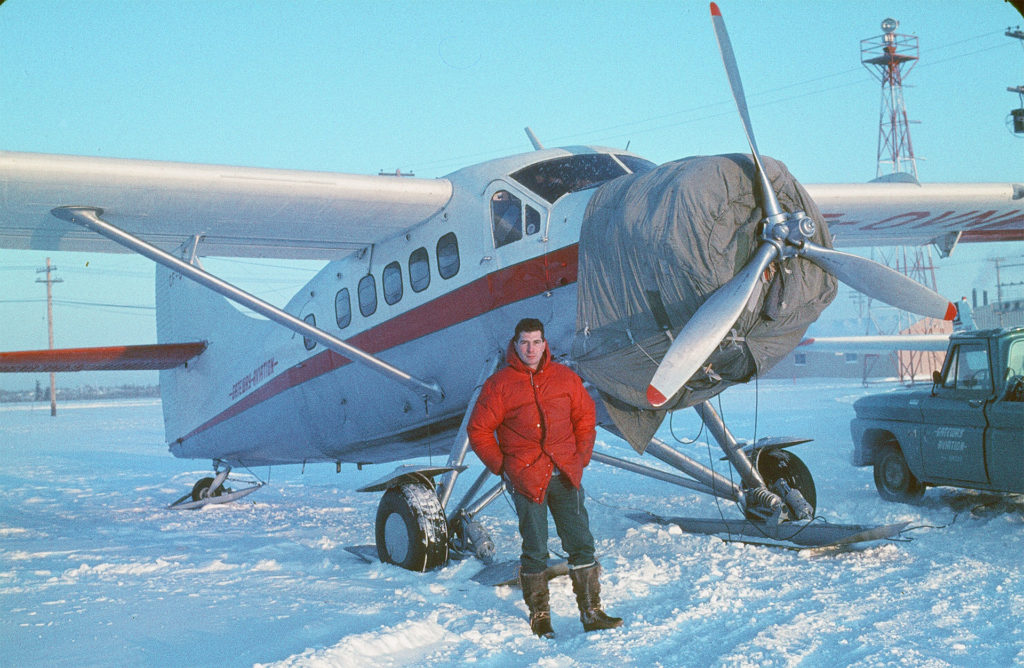 His passion extended to writing about the life of an Arctic bush pilot and soon he was regularly publishing stories of his flying adventures for Aviasport, an aviation magazine in France. His tales from 1966 to 1971 struck a chord with young French pilots who were—as Prinet had been—feeling uncomfortable with their country’s social environment in the late Sixties.

Flying to Extremes draws on these early stories including Prinet’s description of Yellowknife in 1967: “The community was a hub at the end of the road,” he writes. “To travel further north one had to take a plane, either from the airfield with two runways, where men like Bob Engle (NWT Air), Bob O’Connor, Don Burnett, and Duncan Grant flew with airplanes on wheels, or from the protected bay…with ski planes or float planes.” The latter included the legendary Max Ward who later created Wardair. But the people who really captured Prinet’s imagination were “the real men, the muscly men, who were afraid of nothing, chased women, smoked a lot, and drank even more—in other words, the bush pilots, the miners, the construction workers, and the truck drivers.” 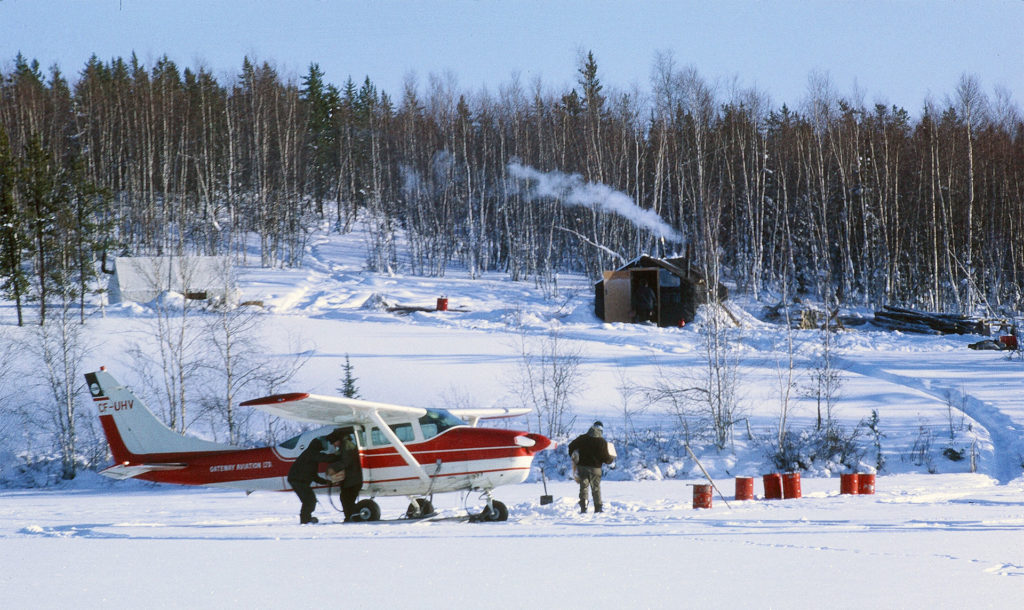 One episode in particular will interest most pilots as well as illustrate the perils of Arctic bush flying. It was August 1967—a season of raging forest fires in Canada’s North. Prinet was flying a Single Otter on floats into a small Indigenous settlement near Great Slave Lake called Rae Lakes to pick up ten fire fighters. On his last trip he had crammed in all ten men along with pumps, hoses, shovels, and tents but had to leave crates of food behind for fear his Otter would sink.

This necessitated flying to Lac La Martre, 125 miles to the northwest, to pick up a ton and a half of fresh whitefish. Normally, such a side trip would have been routine. But the fish were in semi-rigid plastic tubs stacked three high in the airplane. Before takeoff, Prinet had secured the tubs with rope so as to prevent them from shifting.

“Everything was going well until, during the climb, one of the lower tubs collapsed under the weight, then another, and another,” he writes. “The fish started sliding back to the tail section…the centre of gravity was soon beyond limits, and the aircraft, now completely out of balance, became nearly impossible to control. I pushed the yoke forward all the way to get the aircraft’s nose horizontal, set the trim to full ‘nose down’ position, dropped a bit of flap to lower the nose a little more and reduced the engine thrust to coax the aircraft to pitch downward.”

The Otter was still flying with a nose-up attitude, on the verge of stalling, and “if it did, it was likely to start a spin towards the small islands and rocks. The fish would be thrown around, and there would be no hope of recovery.”

Prinet sent a Mayday to Yellowknife tower requesting a high-speed straight-in approach and “the whole ground crew caught the plane as it passed the dock at great velocity.”

About a dozen stories in the book offer other northern experiences; notably including one about his new bride who came fresh from the upscale Neuilly district of Paris. Prinet had convinced her to move directly to the North where she adapted readily to adventures like plunging through a frozen lake and swimming in frigid waters to escape a plane’s sinking. 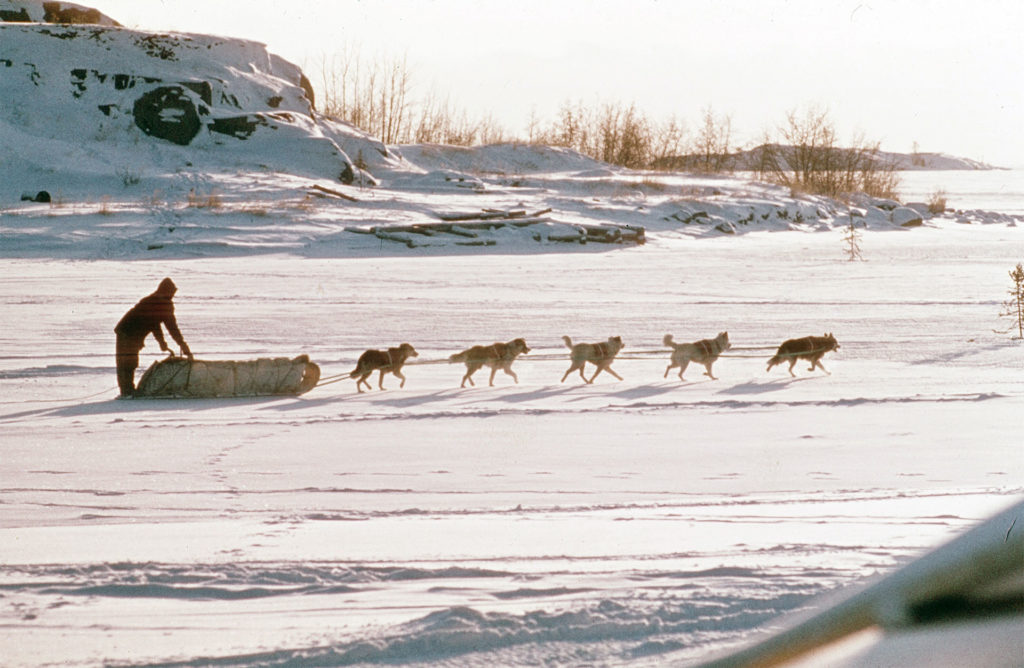 An Indigenous dog team on Great Slave Lake, commonly seen when Prinet and his wife lived in the North. Dominique Prinet photo.

At once a highly entertaining adventure and inspiration-for-life book, Prinet pulls it off in fine fashion with this glossy and lavishly illustrated volume. He appeals to youth who are feeling lost and desperate “not to worry. You are not alone.” 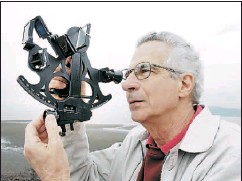 During and after his adventures flying in the North, Dominique Prinet earned an electrical engineering degree from UBC and an MBA from McGill. He worked as VP for Nordair while teaching microeconomics to MBA students at McGill for about 12 years. He moved to Vancouver in 1988 when asked to join Canadian Airlines as their VP Marketing, then went to Tanzania, in East Africa, to turn around the national airline and manage it for five years under a World Bank project. In retirement back in Vancouver, Prinet became a sailing instructor and instructor evaluator, and published several books on celestial and coastal navigation.