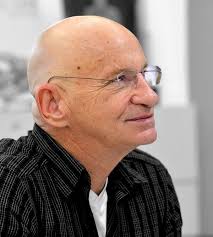 Jim Deva, the bookseller who instigated a decades-long legal battle with Canada Customs over discrimination issues, died after falling from a ladder last Sunday afternoon. He was 65.

Deva co-founded Little Sister’s Book and Art Emporium in Vancouver in 1983 and became well-known for promoting and defending LGBT literature. In a case that would span 20 years, Deva fought for the right to sell and import LGBT-themed books to his store, and for that right to be extended to other Canadian booksellers. His case was eventually brought to Canada’s supreme court.

Through his legal battles, Deva developed a high profile in the LGBT community and Little Sister’s became as much a community center as a purveyor of books. In April, Deva and Little Sister’s were awarded the Gray Campbell Distinguished Service Award by the Association of Book Publishers of British Columbia. Below is the speech that award presenter, Brian Lam (publisher of Arsenal Pulp Press) gave at the award ceremony. Lam provides some interesting historical detail about Jim Deva and Little Sister’s.

Jim Deva is survived by his life partner, Bruce Smyth. A celebration of Deva’s life will be held at St. Andrew’s Wesley Church Saturday, September 27 at 3:30 p.m.

“In 1984, a young man of twenty-two moved to the big city of Vancouver for a summer job. Being shy and somewhat aloof, he didn’t make new friends easily, and while he loved the company of a good novel, he wasn’t able to find many books that told the kinds of stories in which he saw himself, making him feel less alone. But then he stumbled upon a bookstore located on the second floor of a converted house on Thurlow Street in the West End. Ascending the staircase, he saw announcements of meetings for various gay and lesbian groups, and typewritten notices from those looking for “like-minded” roommates, and handwritten posters asking for witnesses to the latest gay bashing down the street. And then once upstairs, in the narrow confines of crowded bookshelves, and in the covers of so many books of gay fiction, poetry, self-help, and history, he saw a reflection of himself looking back at him, and he finally felt like he had found a second home of sorts. That young man was me, and that bookstore was Little Sister’s. A year earlier in 1983, Jim Deva and Bruce Smyth, along with Barb Thomas, opened Little Sister’s Book and Art Emporium in that converted house on Thurlow Street. After moving to Vancouver from the prairies, Jim and Bruce worked in retail, and when they decided to go into business for themselves, they considered opening a clothing store or a shoe store, but finally settled on the idea of selling gay and lesbian art and books. Named for Jim and Bruce’s cat, the store featured art exhibits from local gay and lesbian artists, but soon they discovered that selling books was more profitable than selling art, so Jim and Bruce invested their savings in book inventory, counting on Vancouver’s burgeoning gay community in the West End for support. It was a good time for a gay bookstore; there were more and more books being published, some 15 years after the Stonewall riot in New York, considered the birth of the first meaningful gay liberation movement, and there were like-minded literary and political allies in the city, such as the Vancouver Women’s Bookstore in Gastown, the feminist Ariel Books in Kitsilano, and the gay newspaper Angles, which also started in 1983. In those early years, Little Sister’s became the go-to place for Vancouver’s gay and lesbian community, not only to pick up books on subjects close to home, but to be in a place where they could feel safe and among friends.

In May 1985, however, that good feeling dissipated when Canada Customs seized a shipment of lesbian magazines headed to the store. It was the first of many seizures of books, magazines and videos suffered by Little Sister’s at the hands of Canada Customs, who seemed to single out the store for special treatment. This became all the more apparent when other mainstream bookstores in town like Duthie’s would receive the same books that Little Sister’s ordered, without consequence, whereas Little Sister’s stock would be intercepted. In December 1986, in the midst of the important holiday selling season, Customs seized more than 600 books and magazines that the store had ordered, claiming that the material violated Canada’s obscenity laws. Jim and Bruce discovered that according to federal law, Customs had and continue to have the power to exercise “prior restraint” of any book, magazine, or image that they deemed as obscene. At first, they were loath to fight back, not wanting to stir the pot and engender possible retribution from Canada Customs or other agencies. But then they decided that enough was enough, which triggered an epic twenty-year-long legal struggle against Canada Customs and their systematic seizures.

In May of 1987, Little Sister’s, along with the BC Civil Liberties Association, challenged Canada Customs on one of their rulings, in this case two issues of the gay newsmagazine The Advocate that were seized on the grounds that two advertisements were obscene. A year passed before the federal government acknowledged that it had made an error, a victory of sorts for the store, but the admission meant that the case would not be heard in court. Meanwhile, as a result of its very public legal fight, Little Sister’s reputation not only in Vancouver but across the country became notorious, especially at a moment in gay and lesbian history when full rights for LGBT people in Canada were still decades away from being implemented. In December 1987, a bomb was thrown into Little Sister’s stairwell; two months later, a second bomb exploded while Jim and new co-owner Gaston Nadeau were having dinner in the restaurant below the store. Police told them they were lucky to be alive, but while the incident led to many staff members to quit, it only made Jim and Bruce more resolute in their convictions that their battle against Canada Customs had to continue, even when a third bomb was detonated in Little Sister’s stairwell in 1992.

In March 1990, Little Sister’s and the BC Civil Liberties Association filed a claim with the BC Supreme Court to challenge state censorship. After several delays instigated by the federal government, a trial finally got underway four years later, in 1994. The proceedings included witness testimony from several experts, including esteemed American writers Pat Califia and Sarah Schulman, Vancouver bookseller Celia Duthie, Governor General’s Award winner Nino Ricci, and beloved BC author Jane Rule, whose own books, The Young in One Another’s Arms and Contract with the World, were among the titles seized by Canada Customs.

In her testimony, Ms Rule said: “I bitterly resent the attempt to marginalize, trivialize and even criminalize what I have to say because I happen to be a lesbian, I happen to be a novelist, I happen to have bookstores and publishers who are dedicated to producing my work. The assumption is, therefore, that there must be something pornographic because of my sexual orientation, and I think that is a shocking way to deal with my community.”

In January 1996, the BC Supreme Court ruled that Canada Customs had indeed violated the Charter of Rights and Freedoms. Janine Fuller, Little Sister’s long-time manager who had been the spokesperson for the store throughout the trial, proclaimed that the ruling “means we’ve been understood and validated as Canadians.” But the victory was bittersweet, as not only had Little Sister’s spent $250,000 in legal expenses, the Court upheld the right and authority of Canada Customs to seize material that it deems obscene in the future.

But Little Sister’s legal fight did not end there. In 2000, they took their case to the Supreme Court of Canada, which in a 6-3 decision agreed with the BC Supreme Court’s decision that Canada Customs had unfairly targeted the store, but that Customs still had the right to detain material ruled to be obscene. Within a year of the Supreme Court’s ruling, Customs’ seizures resumed, and the store considered going back to court, but in the end declined due to a lack of funds. At the same time, their twenty-year battle was viewed within gay and lesbian communities across Canada and around the world with great admiration and respect, and to this day Jim, Bruce, and Janine are regarded as heroes in the fight against censorship both here and abroad. The legacy of their experience can be seen in Aerlyn Weissman’s 2002 feature documentary about the trial entitled Little Sister’s vs Big Brother, a film that remains a profound and moving historical record.

Today, 31 years after Little Sister’s opened, the book industry has changed – drastically. The concept of the independent LGBT bookstore is challenged by monster big-box retailers, ebook readers, and a new generation of LGBT youth that, as the result of new-found legal and social freedoms, doesn’t feel the urgent need to read books specific to their experience. Still, Little Sister’s remains in business, one of only 3 LGBT bookstores in Canada, and while there is only one dedicated LGBT bookstore in Vancouver, it is still one more than cities such as Chicago, Los Angeles, San Francisco, and Seattle have. In the same way that the LGBT community has evolved, so has the store; books now share space with greeting cards, gift items, and shall I say, recreational objects of a personal nature. But to me at least, books remain the heart of the store, and we at Arsenal Pulp Press, as well as British Columbia’s writing and publishing community, are grateful. So too are the countless LGBT people who have passed through their doors and found a piece of themselves on the bookstore’s shelves, like that 22-year-old back in 1984. In one of many profiles of the store published in Vancouver’s LGBT newspaper Xtra West, Jim Deva once said, “More than anything else, Little Sister’s represents the power of community. It has never been about one person, or two, or three, or four. It’s always been about a community.” Jim and Janine, the community both here in this room and beyond these walls, salute you.

I’m very honored to introduce the winners of the Gray Campbell Distinguished Service Award to the co-owner and manager of Little Sister’s, Jim Deva and Janine Fuller.”