During the civil war in Sierra Leone, thousands of people had their limbs severed. 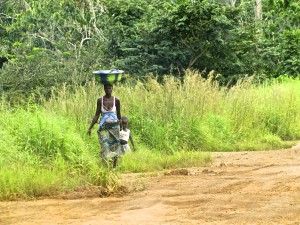 My Heart is Not My Own culminates at Sumbuya, a rare Sierra Leone village unaffected by ebola.

As riveting as it is disturbing, Michael Wuitchik’s My Heart Is Not My Own is a return to that heart of darkness.

Wuitchik’s debut novel follows the quest of Dr. John Rourke, who served as a “cowboy doctor” during the bloody upheaval, to learn the fate or whereabouts of two people he had worked with ten years earlier: a sophisticated, local doctor named Momodu who hurriedly gave him a tribal mask for safekeeping, and a beautiful Sierra Leonean nurse/midwife with whom he once made love. Rourke is haunted by his memory of the last time he saw Mariama, at the height of the upheaval, when she insisted he help her deliver a baby girl from the belly of a tortured, mutilated mother just before armed rebels were about to overrun the main hospital.

In Vancouver, happily married and about to become a father for the first time, Rourke receives several ominous phone messages regarding Dr. Momodu’s sacred, tribal mask as well a mystifying, mail delivery of Mariama’s diary that describes her horrendous experiences as a rape victim and captive nurse among a vicious troupe of crazed rebels.

Rourke’s new wife tells him he must place the past behind him for the sake of their marriage; and so she encourages him to follow his instincts and return to Sierra Leone to learn what happened to Momodu and Mariama. Secretly carrying the tribal mask given to him by Momodu, Rourke returns to the capital, Freetown, where he hires a one-armed driver with a beat-up Mercedes for a journey into the hinterlands. The reader is simultaneously made privy to horrific events Mariama has recorded during her servitude in a brutal world of drug-crazed child soldiers, gang rape victims, bush-wives and African secret societies. During her trek, Mariama steadfastly carries the newborn baby that she and Rourke delivered from its dying mother in the hospital corridor.

After he learns Momodu was burned to death, Rourke reaches the town of Bo knowing they are being followed. Ultimately Rourke’s search for Mariama takes him to the fictional town at the end of the road, Liliema (Peaceful Place, in the Mende dialect), based on the real village of Sumbuya, on the Sewa River.

Getting there is a journey Wuitchik knows well. There are two approaches possible.

Most people would take the main road from Freetown, through Hastings, through the market town of Moyamba Junction to Bo–a dusty place with diamond merchants and traders of everything description. Bo prides itself as the only major town in Sierra Leone that did not fall to the rebels during the ten-year civil war that ended in 2002. An alternative route, which Wuitchik has taken a few times, is the ‘back road’ along the seacoast south of Freetown. Again, the destination is the main town of Bo.