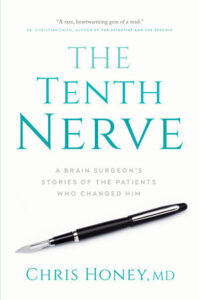 The cover image of The Tenth Nerve: A Brain Surgeon’s Stories of the Patients Who Changed Him (Penguin Random House $32.95) is subtle. Most people won’t notice a fountain pen has been combined with a scalpel. Dr. Chris Honey’s first book looks like it could be just another medical memoir – inspiring, autobiographical war stories from the front lines of modern medicine – until the reader learns this Vancouver brain surgeon has found remedies for two hitherto un-named and serious maladies that have afflicted and puzzled mankind for centuries. –Ed.

BCBookLook: You have made two rather heroic discoveries. Why is the packaging for this story so subtle? Don’t you want to be famous?

Dr. Chris Honey: Well, growing up in Barbados it was never my ambition to be on Oprah. I hope the message of my stories resonate with readers. The book is an homage to my patients who have taught me more about medicine than any of my textbooks or lectures.

BCBL: The Tenth Nerve can be likened to a detective story. You are solving a mystery. And the reader goes along for the ride. A ten-year ride…

CH: Yes. The discovery of a medical disease is like solving a mystery…but only after you recognize that there is something to solve. The first step for me was to listen to my patients and understand that they were describing a problem that was not yet in any medical textbooks (or on the Internet). I had an idea that their symptoms could fit with a problem caused by a compression of their vagus nerve. Then I had to prove that was the case and eventually operate to ‘decompress’ the nerve.

BCBL: The “tenth nerve” affliction you have called H.E.L.P.S. is kinda’ hard to explain, and yet its repercussions for many thousands of sufferers can be severe—not just physiologically, but also socially…

CH: In medicine we try to diagnose a condition by first recognizing its symptoms. If we don’t recognize the problem, we often fall back on blaming the patient. “It’s all in your head.” My patients were describing intermittent severe choking and coughing but all the tests for the causes of these problems were negative. Every patient was then told “it’s all in your head,” or in medical jargon – you have a psychological problem and need to see a psychiatrist.

One of my patients refused to be ignored and knew her condition was physical not psychological. She convinced me to think beyond my formal training and consider a new disease. She was right and brave enough to accept a brain surgery operation that cured her. The pieces started falling into place as we treated more patients with this condition. We began to understand the signs and symptoms of hemi-laryngopharyngeal spasm (HELPS) and, more importantly, how to diagnose and cure it.

BCBL: Is it possible to explain, in layman’s terms, what your second medical-leap-forward entails?

CH: The second disease we discovered followed logically from the first. The vagus nerve does many things including controlling the movement of the throat (that’s why compressing or pinching it causes the throat contractions or choking seen in HELPS). It also does the sensation from the lungs – that tickling sensation you get if you breathe in something solid. That sensation triggers a cough. Compressing your vagus nerve should therefore also trigger a tickling sensation that causes a cough. That cough would have no obvious cause – no infection, no asthma, no acid reflux. We discovered that a blood vessel in the brain pressing on the root (origin) of one side of the vagus nerve could trigger this coughing – and operating to decompress the nerve cured the cough. The condition was therefore a ‘vagus associated neurogenic cough occurring due to unilateral encroachment of its root’. The acronym was irresistible – VANCOUVER syndrome.

BCBL: Now that you’ve proven that these afflictions are not psychosomatic at all… how do you go about telling doctors around the world about what you’ve discovered?

CH: Knowledge transfer (KT) in medicine is usually through peer-reviewed journals or medical meetings. We have published our discoveries in neurosurgical and ENT journals. Our medical meetings, however, all stopped because of the COVID pandemic. I was supposed to host the 3rd World Neurosurgical Congress in the summer of 2020 in Vancouver. This meeting focuses on ‘microvascular decompression’ or the MVD operation that can be used to cure HELPS and VANCOUVER syndrome. All the top neurosurgeons in the world were coming here and I was looking forward to telling them about our work here in Vancouver. Well, the meeting was postponed twice but it looks like we are on for this summer.

BCBL: About how many brain surgeries do you perform in an average week at VGH?

CH: I operate at VGH and UBC and usually do one big operation a day and often can do a few smaller cases as well. We typically operate twice a week and again if there are emergencies.

BCBL: So how many lives do you save per year?

CH: Our lifesaving operations are usually when we are ‘on call’ and someone has been injured. So usually once a week.

BCBL: So far, has there been any recognition with the medical world about what you and your VGH colleagues have discovered?

CH: Yes. All the top neurosurgeons in the world are coming to Vancouver this summer. I would like to think it is to hear what I have to say but the real reason is they all want to see Vancouver in the summer!

BCBL: In The Tenth Nerve, you credit a series of patients who have affected your own life, and contributed to your pursuit of knowledge. But who would you say has been the greatest influence on your medical career?

CH: I have been very lucky to have exposure to excellent schooling and a series of mentors. My neurosurgical mentor was Dr. Felix Durity. He immigrated to Canada from Trinidad & Tobago and was the first neurosurgical resident in Vancouver. He has made outstanding contributions to the Black community in British Columbia but has also mentored a number of individuals such as myself. It was his vision for neurosurgery that we should specialize and each become experts in a few procedures rather than be generalist. That freedom to specialize has allowed me to discover conditions my colleagues never considered.

BCBL: Last question: why the heck would a publishing house not mention that you also competed in the Olympics?

CH: That was a very interesting chapter on my life. I was standing underneath the diving board when Greg Louganis hit his head in the Seoul Olympics. I was going to jump in after him but waited for the bubbles to clear so I could see him. He came up OK holding his head. After my dive, I went over to his coach to ask if I could help sew him up (he had gashed his scalp). His coach, Ron O’Brien, screamed profanities at me to go away! I thought he was a jerk and didn’t think much more about it until years later it came out that Louganis was HIV-positive at the time. In hindsight, I think the coach was just trying to protect me. We did not know much about the AIDS virus in the 80’s.