Death of a Lawyer 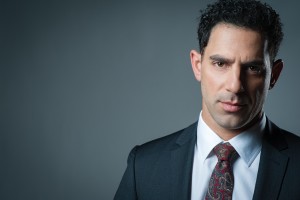 The Pulitzer Prize-winning Disgraced is a must-see play.

We are introduced to two mixed raced couples—both evidently childless—who are friends in ultra-competitive New York. All the action occurs in one spacious apartment on the Upper East Side.

The main character in this tragedy about the dissembling of civility is a high-powered corporate lawyer, Amir, who has rejected the Muslim faith as antiquated and cruel.

Amir’s attractive white wife Emily is a yet-to-be successful artist who wants to incorporate the sophistication of Muslim art into her paintings.

Isaac is a worldly Jew who makes all the artistic decisions for a highly prestigious art gallery; his black wife Jory is a lawyer in Amir’s law firm (hence the initial connection for the foursome).

All the action occurs in Amir and Emily’s apartment. Initially we see Emily making a sketch of Amir while he is distracted by business calls. Effective and brusque on the phone, Amir is completely disinterested in Emily’s notion of depicting him as a dashing, noble, Moorish slave in the style of Diego Velázquez.

Velázquez’s personal slave and assistant Juan de Pareja himself became a painter and was freed by Velázquez in 1654. His portrait hangs in the Metropolitan Museum of Art, where Emily has been inspired by it. But Amir’s disinterest borders on disdain. He is climbing the ladder of success to be a master, never a slave. That’s what America is all about. The house of upwardly mobile cards painstakingly built by Amir begins to tumble with the arrival of his teenage nephew at the door. He wants his uncle’s help. A seemingly righteous Imam at his local mosque has been apprehended by police. It is unfair. The Iman is a devout man. There is just no way he can be affiliated with terrorism, pleads the boy. As a shrewd lawyer, can’t Amir assist in extricating the Imam from detention?

Amir started out as a defence attorney but he has switched to corporate law. We will later learn that Amir was born in Pakistan, but told his law firm he was born in India. Amir wants no part of it. When Amir refuses to help the persecuted Iman, disappointing his nephew, his wife Emily urges him to at least attend a courtroom hearing.

Amir relents. But a newspaper article erroneously reports that he was part of the Iman’s legal team. The coverage is buried in the back of the paper. Maybe it won’t be a problem.

To divulge more of the plot would risk ruining the sit-dram. The two couples come asunder during the course of a dinner party. Revelations cripple their lives forever. There is some very convincing (well-orchestrated) violence. The nephew reappears towards the end of the play, having changed his name from Abe to Hussein.

None of the four enlightened and refined adults think of themselves as racist. It would be an appalling insult to any one of them if that accusation was made. But the playwright has written Disgraced to assert that his characters nonetheless harbour racist sensibilities that—for lack of a better term—are inborn.

Or as one character puts it, “It’s tribal. It’s in the bones.” The social tragedy of racism has been a cancer in American society ever since slave-owner Thomas Jefferson declared all men are created equal. Just when our chronically delusional American neighbours have been presented with a glimmer of hope with the arrival of a black president, the USA has been beset by a new, virulent, anti-Muslim strain of the disease.

The Crusades have crossed the Atlantic.

Even if you put on an expensive suit and work seemingly above the fray in an office tower in New York—the pinnacle of power in the home of the brave and the land of the free—you cannot insulate yourself.

Amir’s shocking speeches about 9/11 and the ascendancy of his black friend in their law firm—conveyed by a strong performance from Patrick Sabongui in the lead role—are as upsetting as the outburst of violence that will cast him into a well of loneliness and self-rebuke.

Again, we can’t say more because we want you to see this play.

It’s not a topnotch production. From the moment we see her sketching on the sofa, we never believe for one second that Kyra Zaborsky as Emily is a serious artist. That blonde wig doesn’t help. She should exude the confidence of one of those articulate Vassar grads. We only believe she can cook a nice dinner.

Robert Moloney is a very fine actor but he is not credible as New York Jew who runs a prestigious gallery in high-octane New York. Surely there is at least one Jewish actor in Vancouver who could have been cast. And what the heck was he wearing? Some sort of safari jacket?

In the opening scene, Sabongui and Zaborsky had difficulty projecting. Possibly their intimacy could have been credible on television or film, but we couldn’t hear them clearly in the balcony.

Director Janet Wright has got the tempo right, but the cast lost some of the lines on opening night, not yet gauging audience responses correctly. This was a nervous cast, not one that felt it had a tiger by the tail.

The dissolution of civility in Disgraced is jarring, upsetting, harsh. Disgraced is a continual whirlpool that sucks us down the drain into the muck of fear and loathing. Amir spits into his best friend’s face. There is a brutal, physical attack. There should be a New York-ish edginess to the characters. This production borders on Vancouver Nice.

One Response to “Death of a Lawyer”