Bowering stays in the line-up

Following a cardiac arrest, George Bowering, at 80, will appear at the Vancouver Writers Festival, Oct. 20th. 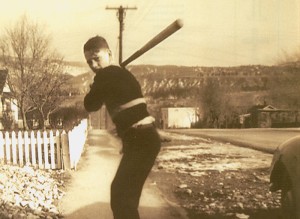 An avid ball player since youth (above), George Bowering has Aaronesque longevity in literature.

He has four new books this fall.

George Bowering has more than a hundred books to his name. Prior to his Writers Festival appearance, he has been featured on the cover of B.C. BookWorld‘s Autumn issue.

After a near-fatal cardiac arrest in April, George Bowering was rushed to Vancouver General Hospital and induced into a coma for twelve days. By June, despite his broken ribs and broken sternum, the rehab department said Bowering was in better shape post-incident than most other 79-year-olds without an incident.“On the second assessment day they asked George if he could jump,” said his wife, Jean Baird. “He jumped. They said they’d never had another before who was able to jump.”The walker was returned in early June and he began using a cane, improving his muscle tone. By the end of June he was back at Nat Bailey watching Vancouver Canadians baseball and with tickets to the jazz festival. And he was working on a new novel.

Indefatigable, Bowering has four new books due this fall and he’s sent a long, personal letter to Premier Christy Clark asking her to support a federal plan for a new grasslands national park in the mountains of the South Okanagan where he grew up.

“I love the valley,” he wrote to her, “and I hate to see its desecration.”

At the millennium, the Canadian government decided to create the post of Parliamentary Poet Laureate. In 2002 George Bowering became the first poet to be honoured with the title. For me, Bowering remains a poet, first, last and always. His newest collection of poetry is The World, I Guess (New Star $18).Currently active in lobbying the provincial government to assist the federal government in creating a major national park for the south Okanagan, Bowering has drawn from forty books he has published since 1960 for a new anthology of his varied writing about his beloved homelands, Writing the Okanagan (Talon $24.95).

A magic-powered ring from ancient Rome surfaces amid the Poets’ Club at thirteen-year-old Harry’s school in Bowering’s juvenile novel Attack of the Toga Gang (Dancing Cat $12.95) giving rise to malevolence from a centuries-old, secret organization known as the Toga Club.

I expect all three of those new books this fall will be worth a gander, when they appear. For now, I’ve been reading his latest fiction.

The narrator of one of the stories in Bowering’s new collection, Ten Women (Anvil Press $20) says, “I have been reading Dickens again. He seems totally different when you come back after all these years.” Bowering, who will be turning 80 in December, has published about one hundred books in just about every genre, so you could probably say the same about him.

He said as much in a 2012 Globe & Mail interview when he admitted to having on occasion read a story and thought, “I wish I’d written that” only to discover he did.

If he makes it to 90 or a century, he’ll probably say the same about his tenth collection of short stories, Ten Women, and with good reason. This is a rarity in such collections; an elegantly structured book with a central theme general enough to let the author run totally amok while maintaining a satisfying sense of unity overall.

Most short fiction collections consist of stories linked only by their having been pre-published in literary magazines, duly listed on the inside front page like film credits; mini-CVs to impress other writers and perhaps more prestigious potential publishers. The randomness of the contents usually helps to explain why these volumes sell poorly.

Ten Women consists of ten stories, each bearing a woman’s name as a title. Each story explores some aspect of the infinitely variable fascination one gender of our species exerts on the other.

Bowering is old-fashioned enough to be shamelessly straight and sensibly leaves The Love Whose Current Acronym We Can’t Decode in younger, more flexible hands.

The point of view in these stories is consistently male, but leavened by an objective authorial passivity that listens, records and thinks about what women say and do: e.g. the ostensible narrator may be handcuffed to a chair, blindfolded and sexually teased to obsession by a female poet he met at a reading, but the author is trying to figure out what makes both of these characters rev to the red-line.

[I’ve attended lots of poetry readings and never once been taken home, blindfolded, chained to a chair by a gorgeous female poet and required to identify her body parts by their scent. What am I doing wrong, George?] Within this loose structure, Bowering goes on a tear like a cowboy in a cathouse. “Professor Minaccia,” the only story not titled by a woman’s familiar first name, owes something to Elmore Leonard’s novel, Gold Coast, about a woman forced into respectably chaste widowhood by her deceased husband’s mob cronies. Bowering’s version is more literate, less lurid, but equally unflinching about the power that hard men in dark cars, men who don’t read Proust, can exert on our lives.

The Canadian literary community comes in for some fine ass-kicking in “Dodie”, about a female SPCA worker who stalks poets who have made careers out of using images of innocent animal agony to give their work shock power. Possibly Patrick Lane will cringe reading this one.

Grammarians will love the wildly funny “Ichiko,” in which a performance artist achieves fame by inserting neglected apostrophes in iconic corporate logos, only to discover in a biker bar that punctuation can be the real thief of time.

Writing has the distinction of being one of the few occupations at which you can be 80 years old and be at the top of your game.Play on, George.

John Moore regularly writes for BC BookWorld from Garibaldi Highlands.