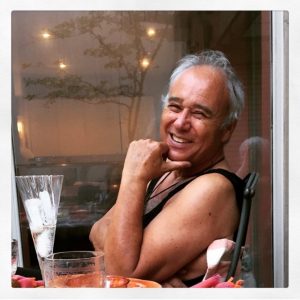 With the encouragement of an exceptional English teacher named Harry Locke (also a formative influence on several B.C. authors) the precocious David Robinson co-founded a literary magazine called Talon in 1963 while he was a student at Magee High School in Vancouver. It operated from his parents’ garage.

By 1967, David had published Talon’s first book, fireweed, by Ken Belford, while attending the University of British Columbia. In the same year, the first issue of The Georgia Straight was produced by a collective. Similarly, Talon emerged in conjunction with bill bissett’s blewointmentpress and Jim Brown’s Very Stone House.

Although he was the son of J. Lewis Robinson, head of UBC’s geography department from 1953 to 1968, David was motivated by his contacts within the fields of literature and theatre. He was known to have boasted to at least one protegé, “I f— the people I publish; and I publish the people I f—.” Such was the temporary zeitgeist of the 1960s.

Far more importantly, David not only esteemed and respected artists, stroking their egos to gain their allegiance to his imprint, he was a sublime adjudicator of talent. He prided himself on his judgments as a literary impresario–and he proceeded to excel at publishing the country’s foremost playwrights, taking particular care with the design of his books. For this activity alone, he merits a place in Canada’s Publishing Hall of Fame, should there ever be one, although it was actually colleague Peter Hay who conceived of a series of Canadian plays in 1969 after Hay had published Beverly Simons’ Crabdance. 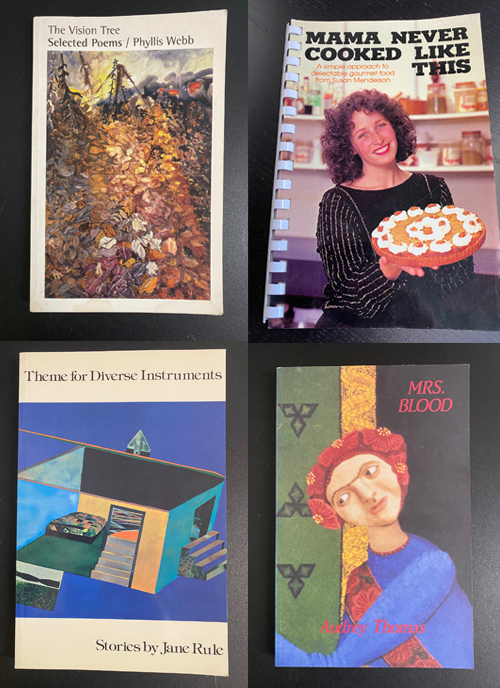 By the time the Association of Book Publishers of B.C. was founded in 1973, David was already figuring out the new lay of the cultural land. It is seldom cited that he had business partners almost from the get-go: most importantly Peter Hay (Talon’s mostly unpaid drama editor until 1980) and Gordon Fidler (a printer, until 1976) who was a co-owner/proprietor with Robinson. It was Hay who approached David and Gordon about publishing James Reaney (Colours in the Dark) and George Ryga (The Ecstasy of Rita Joe) while he was still operating from his father’s garage. Soon, Talon started receiving orders for hundreds of copies, mainly for drama courses at universities. Gordon Fidler was keen to continue on operating a capricious old press that worked well for a few hundred poetry books. David Robinson became very enthused when Hay also brought Michel Tremblay into the fold. Success has many fathers and Hay’s crucial role was downplayed when he left to work in Los Angeles.

“During my years with Talon from the late 60s to the early 80s,” Hay recalls, “David Robinson was the beating heart of this small regional enterprise that grew into a nationally recognized publishing house. While many small presses reflect the personality of the printer, in the case of Talonbooks it was design that dominated. Every book expressed an exquisite aesthetic that came from David, who designed the cover, chose the paper, did the layout, wrote the press release, and individually wrapped review copies with meticulous attention. His creativity propelled everything at Talon, and yet he gladly ceded the limelight to others, and especially to authors he loved. When I look on my shelves at the dozens of books from Talon’s early period, I still feel in each one a sensibility that came uniquely from David’s soul.”

When the pressures of managing a growing, national imprint became too much for him, David consented to allow himself to be rescued by a more assertively masculine force, Karl Siegler, age 26, who had attended and taught at the cauldron of new-fangled radicalism known as Simon Fraser University. Karl first worked at Talonbooks in January of 1974.  He became President & CEO when Talon Books Ltd. incorporated in 1975, though still operating as Talonbooks. As Karl took over the business side, leaving David to handle creative matters, Siegler became a very forthright and sometimes even intimidating force in cultural politics, not afraid to criticize and berate powers-that-be. Cultural bureaucrats of today would never tolerate such braggadocio, but in those days, it was permissible and even laudable to attack the arts bureaucrats as part of the problem, not part of the solution. Siegler, among his many accomplishments, co-founded the Literary Press Group in 1975. The ‘sensitive’ Robinson and the ‘aggressive’ Siegler were seemingly an ideal yin/yang duo until power-sharing within Talon became problematic and a lawsuit ensued as to company ownership, leaving Hay as an outsider.

Having nurtured the career of caterer-turned-cookbook author Susan Mendelson (who started by catering events for the Vancouver East Cultural Centre) and having masterminded bestsellers by restauranteur Umberto Menghi–David (“I’m Gonna Make You A Star”) Robinson surprised many people in 1984 by marrying a second protege, Zonda Nellis, whose career as a fashion designer had already taken off before they joined forces. They had met at party hosted by bookseller Celia Duthie on 1980. In effect, David became the saviour/guide for Zonda’s business in much the same way that Siegler had offered his managerial chutzpah to him after he was already a success. Zonda Nellis Design Inc. flourished for decades ever since. David turned a cold shoulder to book publishing and he became a devoted family man, although he remained as a silent partner in Talonbooks from 1984 until 1992.

With the integral assistance of Mary Schendlinger, Karl and Christy Siegler expanded the mandate of Talonbooks for several decades, retiring to Powell River, whereupon Talonbooks underwent a second reincarnation under the direction of Kevin Williams, formerly of Raincoast Books, who took over majority ownership in 2008 with his wife Vicki. Siegler remained with Talon until 2011.

Simply put, David Robinson was integral as one of the province’s first professional book publishers, in terms of cultural impact. The publishing company he founded now has more than 500 titles in print. Among the other authors he personally published were bill bissett, Marie-Claire Blais, George Bowering, Frank Davey, Roy Kiyooka, Mary Meigs, bpNichol, Jane Rule and Audrey Thomas. In various ways, he was close to all of them. “I am so glad to have been in his world and to have had his stylish figure in mine,” says George Bowering.

“David’s star burned brightly but briefly in publishing,” says veteran B.C. publisher and author Howard White. “I met David at UBC in 1965 before either of us published a book and remember him as a theatrical type always gushing about his latest passion. He was very conscious of literary fashion and eager to be part of the in-crowd, or what he perceived as the in-crowd. I think it was only when he teamed up with a local poet named Jim Brown that he got seriously into books. David turned out to be very good at convincing established writers like Jane Rule and Audrey Thomas to take a chance on a fledgling West Coast press but unfortunately lacked the skill or interest to create a viable business. Ultimately, he had to be rescued by Karl Siegler and Mary Schendlinger, who put Talonbooks on course to become what it is today. But he was there in the early days of the West Coast scene and rates being remembered as a cultural pioneer.”

David Robinson is survived by his wife, Zonda Nellis; his daughter Alexandra Robinson and son-in-law Madhavan Sridhar, and his two granddaughters Maya and Veda Madhavan.

D is for A.J. Devlin