Far more people in the world now have access to mobile phones than to working toilets. 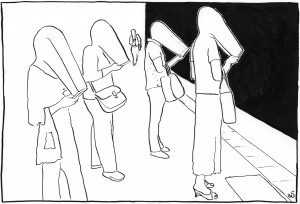 "We clutch our phones to show that we do know at least one other person--that we might look solitary but we have connections." -- Margaret Heffernan, from DYSCONNECTED: Isolated by Our Mobile Devices

And that might not be a good thing. We could be entering a new phase of mankind, a “dysconnected” dystopia.

“We are lonely but fearful of intimacy,” says sociologist Sherry Turkle.  “Digital connections may offer the illusion of companionship without the demands of friendship. Our networked life allows us to hide from each other, even as we are tethered to each other. We’d rather text than talk.”

The American composer Libby Larsen has suggested the great myth of our times is that technology is communication.

“Are we losing the capacity for quiet solitude? Are we filling all previously-empty spaces in our days with electronic ‘busy-ness’? Have online ‘friends’ taken the place of the other sort? Have second lives replaced our first? And, if this is the case, should it be cause for concern?” Included are numerous quotes from futurist author William Gibson. All are sobering. “It’s easier to desire and pursue the attention of tens of millions of total strangers,” he wrote in his novel, Idoru, “than it is to accept the l0ve and loyalty of the people closest to us.”

Anton Scamvougeras was born in Cape Town, South Africa, moved to Canada in 1987, and lived in Saskatchewan, Newfoundland, and Southern Ontario, before settling in British Columbia. He is a physician and artist. His visual art work attempts to deal with questions of identity and place. He lives in Vancouver with his wife, Margot, and their three children. He uses his cell phone at least 20 times a day.

Here here are “PHONE FACTS” from his book.

The number of active mobile devices and human beings crossed at 7.19 billion 2

64% of Americans own a smartphone 3

70% used their phones while working 4

10% admitted to checking their phones during sex 4

57% reported feeling “distracted” thanks to their phone 3

36% reported that their phone made them feel “frustrated” 3 “No one’s forcing you to do this. You willingly tie yourself to these leashes. And you willingly become utterly socially autistic. You no longer pick up on basic human communication clues. You’re at a table with three humans, all of whom are looking at you and trying to talk to you, and you’re staring at a screen!” — Dave Eggers, author, in his novel, The Circle.

77% of parents feel their teens get distracted by devices 6

41% of teens feel their parents get distracted by devices 6

Children between the ages of 13 and 17 preferred face-to-face communication over all technological means of communication, because it was perceived to be more fun and because they could understand people better in person 10

The U.S. National Safety Council found that the use of cell phones causes 26% of U.S. car accidents 11

Reaching for a cellphone, dialing, or texting while driving increases crash risk by a factor of three. 17

After a 15-year old girl was killed by a tram while texting, the city of Augsburg, Germany, installed traffic lights embedded in the pavement designed to alert pedestrians looking down at their phones. 14

A pedestrian sidewalk lane reserved for heavy users of mobile devices, in the city of Chongqing, China, appears to have failed because most cell-phone users didn’t notice the new lane. 15

Sophie Ryder’s 20-foot sculpture ‘The Kiss’, depicting two clasped hands, had to be moved from it’s position arching over a path near Salisbury Cathedral, England, because people distracted by their cell-phones were walking into it. 16 “We love ourselves more than other people, but care more about their opinions than our own.” — Marcus Aurelius, Roman emperor

The longer a teenager spent looking at an electronic screen before going to bed, the worse quality sleep they were likely to have 21

‘Text-neck’ or ‘tech-neck’ is a condition that results from constantly looking down at handheld technology.  22

Cases of near-sightedness have risen 35 percent since the advent of smartphones. 22

Too much screen time can lead to dry eyes. “It causes a decreased blink rate. People just aren’t blinking enough.” 22

This book is also available to indivduals via www.dysconnected.com

One Response to “Communication breakdown”