Commodore gets its due 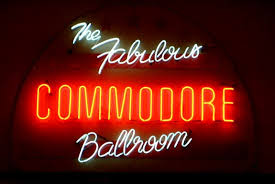 Drew Burns liked his rum ‘n’ cokes but was a class act.

In recent memory, most people know the iconic Commodore Ballroom in Vancouver has played host to musical greats like The Police, The Clash, Blondie and U2, and more recently Lady Gaga, Tom Waits and the White Stripes. But that’s only a small part of its story. Live at the Commodore: The Story of Vancouver’s Historic Commodore Ballroom (Arsenal Pulp Press $28.95) by Aaron Chapman respectfully and diligently recounts the history of Vancouver’s best-loved music venue from its 1930s conception, when it hosted Vancouver’s decadent society set, through WWII and the swing era, to its current state. Having proven himself with  Liquor, Lust and the Law: The Story of Vancouver’s Legendary Penthouse Nightclub (Arsenal Pulp) Chapman has maintained a high standard of populism and scholarship by digging up stories behind the legendary acts that graced the Commodore’s stage, whether it’s the bass player for Talking Heads scoring grass or Patti Smith insisting on taking a bath in a tub that was primarily used as a urinal, he has cleverly mixed history with an assortment of rare photos, paraphernalia and posters. His thorough research also includes reminiscences from the likes of local bluesman Jim Byrnes (fondly recalling backstage conversations with the likes of Muddy Waters and Charley Pride) and reviews by the likes of the indomitable and always perceptive Georgia Straight and Province music critic Tom Harrison.

The central figure in the narrative is longtime Commodore head honcho Drew Burns. Back in the day, when there was no liquor license, patrons brought their own booze but were required to purchase ice buckets per table, hiding their liquor from police. The staff at the Commodore routinely placed the ice buckets on heaters before delivering them to patrons, thereby making the ice melt quickly and requiring them to order another bucket. This is commercial, popular history at its finest–amusing and enlightening. 978-1-55152-566-2