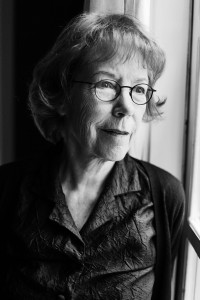 In Mary Burns’ forthcoming novel, The Reason for Time (Chicago: Allium Press 2016), due in April, we will meet protagonist Maeve Curragh as she watches a blimp crash into an office building in Chicago on a hot, Monday afternoon in July of 1919. The return of soldiers from World War One increases racial tensions in Chicago, leading to race riots. Meanwhile Maeve, an Irish immigrant who works as a catalogue order clerk for the Chicago Magic Company, catches the eye of a charming streetcar conductor. During social turbulence, love most go on. 978-0-9967558-1-8 $16.99.

Mary Burns was born outside Chicago and lived in New York and California prior to moving to Canada in 1970. Following stints with newspapers in northern B.C. and the Yukon, she came to Vancouver in 1977, where she worked on several National Film Board projects during the 1980s. Her time in the north gave rise to her first collection of stories, Suburbs of the Arctic Circle (Penumbra Press, 1986). Mary Burns’ collection of eight short stories and a novella, Shinny’s Girls (Talonbooks, 1989), mostly concerns family relations between women. Shinny, the central character in the title story, is a single mother with three daughters by different men, doing her best to cope.  A well-intentioned lie languishes for years before catching up with Shinny, now a middle-aged mother, in Flashing Yellow (Turnstone, 2001), the second volume in Burns’ trilogy, following the protagonist from Shinny’s Girls.  Burns published the final volume in the trilogy as You Again (2013). The entire trilogy is now available as an ebook. Burns’ third fiction collection chronologically, Centre/Center (Talonbooks, 1992), examined the parallels and differences between life in the U.S. and Canada. It takes the form of three novellas, each ten years apart, all about Americans who have come to British Columbia. The final novella is narrated by a 19-year-old daughter, Tranquility, who explores her parental roots in the idealism of California in the 1960s.  Having been fascinated by Paul Gallico’s novel The Snow Goose, Burns attended the annual Snow Goose festivals in Delta from 1990 onwards and published her non-fiction study, The Private Eye: Observing Snow Geese (UBC Press, 1996). Anti-definitive, The Private Eye merges the perceptions and experience of everyone from Yup’ik hunters in the Yukon delta to Dr. Fred Cooke, an SFU biologist who co-authored a major scientific reference work in 1995 called The Snow Geese of La Perouse Bay: A Study of Natural Selection in the Wild.