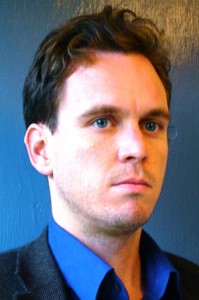 Fraser Nixon was born on the West Coast and has lived in Montreal, Toronto, Paris and Vancouver. By turns an actor, painter, electrical apprentice and hotel night manager, he has worked as a salesman of newspaper advertising, ice cream, opera tickets and men’s casual slacks. His first novel was a neo-noir novel about a hood on a crime spree through Prohibition-era Montreal, The Man Who Killed, selected as a finalist for the Amazon.ca First Novel Award. His follow-up noir crime novel, Straight to the Head (Arsenal $17.95), set in Vancouver in 1983, evolves from the theft of a drug shipment and $300,000 in dirty money by an Eastern European immigrant named Irina. Corrupt cops, bounty hunters and scam artists cavort in sushi bars, nightclubs and New Wave galleries. “Back then there were ashtrays and payphones, but no ATMs. We forget what it was like to carry cash around,” he says. “For my second book, I wanted to step back into that time. To drink bad coffee and know what the hell sushi is.” 978-1-55152-638-6 / Due April 2016