A middle class, white-bread Vancouver family are viciously mean about their daughter's relationship with a much older man despite the charitable causes embraced by the May/December couple. 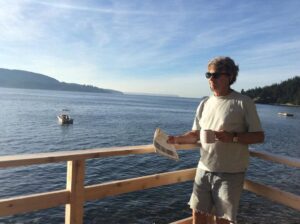 Keath Fraser contends in his new novella that charity, like its sister virtues of hope and faith, is fundamental in reclaiming meaning and purpose in an epoch of feckless anti-virtue such as our own.

Keath Fraser is a writer we used to hear heard a good deal of. Winner of the Chapters/Books in Canada First Novel and Ethel Wilson Awards for his books Popular Anatomy (Porcupine’s Quill, 1996), and Foreign Affairs (Stoddart, 1985), he had an edition of Canadian Fiction journal devoted entirely to him. He was Vancouver’s next author-to-watch.

Fraser was also a writer who gave a damn: a good literary citizen, he devoted time as well as organizational and fund-raising energy to human rights and social activist concerns, and not in a small way as his donated royalties from two popular travel writing anthologies channeled more than $150,000 to the Canada/India Village Aid project founded by George and Inge Woodcock.

But the news here concerns his latest book Charity (Biblioasis $17.95). A novella of 114 pages, Charity arrives as Fraser’s first new work of fiction in 25 years. Somewhere along the line things went a bit quiet. Other projects and issues arose—nonfiction, travel, a rare health problem and a good deal of hospital visiting. For writers though, when the muse calls, you honour the summons. 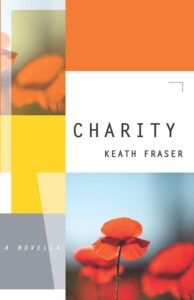 If you missed it first time around, Fraser is an author of place. In the way that Ethel Wilson cast her shadow over B.C.’s interior, or Mavis Gallant made Paris and France her front and back yards, Fraser’s beat principally has been Vancouver. In this respect, Charity reads like a west-of-Granville Street book of manners. Think deep Kitsilano/Point Grey, the woody bluffs above Jericho foreshore.

An opening line about the aging Shakespearian actor who dated one of Motown’s singing Supremes confirms a certain generational view ahead (the Sixties). Patrick Fitzgerald, a portly physician of comfortable means and his second wife Denise, are concerned about their sheltered daughter Greta’s own size and weight. Bright and being groomed by her father to join his practice on her graduation from medical school, Greta insists on having ideas of her own, eating what and when she likes. A loner by nature, she is also dating a much, much older man.

Rudy Skupa, an old friend of Denise’s well-off family, is neither a member of Patrick’s golf club, nor an opera lover.  Retired from his air-conditioning business and a practical man in his eighties, Rudy has a social conscience. He donates charitably to just causes and volunteers at a soup-kitchen in the rugged Downtown Eastside.  Greta’s “dates” with him consist mostly in helping Rudy and his Baha’i friends serve hot meals on Powell Street.

Establishing precisely who the narrator is takes a moment, but once it’s defined Fraser handles one-liners among characters like a zippy sitcom writer. While they fret over the possibility of intimacy between Greta and Rudy, Doc Patrick confides to Denise that it would be as unlikely as “mating a pet goat to a rubber raft.”  What wisecracks can’t conceal is their parental concern at the indignity of a talented daughter being squired by “a little old man with no future.” Imagine what people might say!

Charity is a virtue that can trade unpredictably. In an imaginative, but believable leap Greta applies and is accepted into Doctors Without Borders; simultaneously, a fentanyl crisis festers in her hometown. Surprisingly, Rudy’s trades-skill gains him admittance too. Fraser’s swift-moving style can feel breezy, but Greta’s letters from West Africa’s Sierra Leone illustrate how she matures in conducting herself virtuously: digging wells, “multi-tasking in the neonatal ward,” and coping with equatorial heat and with Rudy’s physical fragility.

Anguished at seeing their daughter led into actions in an Ebola-plagued locale “far in excess” of what she committed to do, back in Point Grey Patrick somehow finds reason to confide in his ex-wife, Judy, who is Greta’s biological mother. Ever manipulative, Judy summarizes that it’s simply a matter of Greta’s “dating the wrong end of the binoculars.” Meantime, true to life amidst existential disruption, Vancouver’s real estate picture finds sudden excuse to intrude.  No news here: we learn it’s as crooked as a dog’s hind leg replete with the ubiquitous “staging” specialists. Evidently, even in the upscale West Side fake is the new real.

With Greta’s eventual, emaciated return, a larger family history unfolds. It’s a novella so events motor along: we get a backstory related between the lines, a little between the sheets or meditatively during tidal walks at Spanish Banks. It’s a generational litany of Vancouver’ish incidents with glimpses of Whistler’s credit-card bohemia; there’s attention to cultured living and fine food details, but it’s of a white-bread Vancouver variety when the men all smoked and being broadminded was eating Italian.

Is there an opportunity to learn and build from the bumps any well-meaning, if sometimes misguided family can experience? Direction emerges when Fraser borrows from his personal history of social action: there’s a promise of light for the future, feminist-inspired action, meaningful cross-cultural work. That’s a provocative scenario—making money and making sense too; what Buddhism calls the practice of “Right Livelihood.” What could possibly go wrong?

Keath Fraser’s return to fiction shines a light on the decisions we’re capable of making to escape the expectations others have of us. In a cozy town like Vancouver there’s room for chaos after all. Mercifully free of fashionable theory and “Woke” cant, his tale picks up on the pains of a newer “shell shocked” generation struggling to cope in a city that effectively stopped caring about them, for whom naloxone and fentanyl are no mere buzzwords. Charity, Fraser contends, like its sister virtues of hope and faith is fundamental in reclaiming meaning and purpose in an epoch of feckless anti-virtue such as our own—a phenomenon of cushioned privilege no poverty will easily understand. 9781771963800