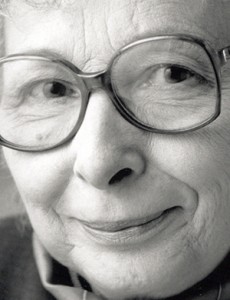 Hosted by Brian Brett, the Vancouver Writers Festival is presenting an afternoon session for and about Phyllis Webb of Saltspring Island, on Saturday, October 25, at 2:00 pm, at the Improv Centre on Granville Island. Tickets are $20 (Purchase Tickets Online)

This year, Talonbooks has released Peacock Blue: The Collected Poems of Phyllis Webb, edited by John Hulcoop. Webb will be available at the event to sign copies of her new book. The celebration will feature readings by George Bowering, Brian Brett, John Hulcoop, Eve Joseph, Daphne Marlatt and Sharon Thesen.

A TRIBUTE / BY DIANA HAYES

“As I prepared for the celebration of Phyllis Webb for the 2014 Vancouver Writers Fest and the launch of her collected works, “Peacock Blue” published by Talonbooks, I came across a postcard from Phyllis dated June 2, 1980 from the Great Canadian Poetry Weekend in Collingwood, Ontario.

“I was 25 at that time, on the cusp of entering graduate school at the University of British Columbia and had nervously written a letter asking if I could visit while next on the island.

“Salt Spring had often been a place to retreat for writing. I would pack up my Underwood and a stack of books and rent a cabin on St. Mary’s Lake, sometimes for two weeks at a stretch. I was working on a long poem that summer and wanted to ask Phyllis for some help. My need for mentorship was stronger than my reluctance to bother her with my fledgling poems. I took a chance and her postcard arrived shortly thereafter. It was a lovely print of Picasso’s “Pigeons”, 1957; two birds on a railing with a bright Mediterranean sea beyond. “Yes, do please come and see me,” she said. “I was thrilled. We met for lunch that June afternoon at her home on Morningside Drive in FulfordHarbour; Leo and Isabel, her beloved cats, joining us. We talked about poetry and life on the island and cats and friends and broken hearts and the poet’s need to retreat.

“The next year my need to retreat from the city became a yearning to move and Phyllis helped me to find my first island home— a 400 square foot cedar cabin on the east bluff of Ganges Harbour overlooking the Three Sisters Islands, heated only with an antique Franklin stove. This cabin had been home to Phyllis for a number of years in the 1970’s. How lucky I felt to inhabit this special space which provided me with many years of contemplation and my second book of poems. “We met now and again for lunch to talk about poetics, the long line and the importance of writing from an authentic voice. Her work continues to provide me with much inspiration and a renewed belief in the beauty of language.

“When I was asked to read from Phyllis’s work for the Vancouver Writers Fest event, I chose three poems that reminded me of those first years in the cabin on Salt Spring. “Wilson’s Bowl” had just been published and I can still hear the conversations we shared and the grief surrounding the devastating loss of her friend, Lilo Berliner, who committed suicide by walked into the sea. All these years later, after a decade of swimming year round in the ocean with the Salt Spring Seals, I have occasionally set off from ChurchillBeach, not far from Wilson’s Bowl.

“‘The Bowl’ was published as a broadside in December of 1981 for Island Magazine, and Phyllis inscribed a copy for me – “successor to the cabin”. Many poems and conversations took place in that cabin on the bluff overlooking the harbour. I was honored to carry on the tradition and felt that I was finally home.”

A SUMMARY / FROM ABCBOOKWORLD

In 1999, Phyllis Webb received the fifth George Woodcock Lifetime Achievement Award for an Outstanding Literary Career in British Columbia. She also received the Order of Canada in 1992 and the Governor General’s Award for Poetry for her Selected Poems: The Vision Tree in 1982.

Phyllis Webb was born in Victoria on April 8, 1927 to Mary Patton and Alfred Wilkes Webb, the youngest child and only daughter in a family of three. Her parents later divorced. She joined the provincial C.C.F. party in 1945 and graduated from UBC with a B.A. in English and Philosophy in 1949. In the same year she ran as a Victoria C.C.F. candidate in the provincial election, becoming the youngest person in the Commonwealth to seek office in a Legislative assembly. In 1940 she attended the national C.C.F. convention where she met F.R. Scott, her most important early literary influence, having participated in an off-campus writing group led by Earle Birney.

In 1950 Webb moved to Montreal and completed a year of graduate studies at McGill. Between 1951 and 1956 she lived in Montreal, associating with fellow writers Louis Dudek, Eli Mandel, Irving Layton, Miriam Waddington and Leonard Cohen, and had her first book of poems published in 1954, including poems by Eli Mandel and Gael Turnbull. It was published by Raymond Souster’s Contact Press in Toronto. She also lived and worked in England, Ireland and France. She received a Canadian Government Overseas Award which enabled her to live in Paris for a year-and-a-half until 1959.

Webb returned to Canada and worked as a freelance copy editor for McClelland & Stewart, publishers of her 1956 collection Even Your Right Eye, and also read scripts for CBC. She moved to Vancouver in 1960 and began working as a teacher’s assistant in English at UBC in 1961. Inspired by a 1963 poetry conference at UBC, Webb was influenced by the West Coast experimentalism of San Francisco and Black Mountain poets such as Charles Olson, Robert Duncan, Robert Creeley and Allen Ginsberg (all of whom she interviewed). In 1964 she accepted a job as Program Organizer in Public Affairs for CBC Radio and she moved to Toronto. During this period, with her colleague William A. Young, she instigated the still-running program Ideas, the most distinguished series of programs of its kind in Canadian broadcasting. From 1967 to 1969 she was the Executive Producer of the program.

During a leave-of-absence from CBC, she travelled to the Soviet Union and also discovered Salt Spring Island as a place for writing and revitalization. She became intrigued with the anarchist movement, beginning work on her ‘Kropotkin Poems’. Increasingly drawn to her own writing, Webb resigned from CBC, having interviewed writers on television (including F.R. Scott, Dorothy Livesay, Margaret and bill bissett) and moved to Vancouver, to ‘save her soul’. She published her Selected Poems 1954-1965 with Talonbooks in 1971. The next year she received the B.C. Library Association Prize for ‘the writer who has made the greatest contribution to the poetry of B.C. in the past five years.’

The suicides of her friend Lilo Berliner (in 1977) and the anthropologist Wilson Duff (in 1976) intensified her writing and furthered her explorations of West Coast imagery and mythology. Prior to her death, Berliner left her correspondence with Wilson Duff about Haida mythology on Webb’s doorstep. Between 1976 and 1979. Webb taught Creative Writing at UBC and UVic. She was Writer-in-residence at the University of Alberta (1980-1981) and published Wilson’s Bowl in 1980. According to John Hulcoop, when the book had been passed over for a nomination for the Governor General’s Award, a group of fellow poets—led by Margaret Atwood, Michael Ondaatje, bpNichol and P.K. Page—collected $2,300 and sent it to Webb, stating that “this gesture is a response to your whole body of work as well as to your presence as a touchstone of true good writing in Canada, which we all know is beyond awards and prizes.”

“My poems are born out of great struggles of silence,” she once wrote, “…wayward, natural and unnatural silences, my desire for privacy, my critical hesitations, my critical wounds, my dissatisfactions with myself and my work have all contributed to a strange gestation.” Webb taught briefly at the Banff School of Fine Arts and also the University of Victoria, then moved back to her Salt Spring Island home in 1990.

“Phyllis Webb is a protean writer of lambent sensibility,” George Woodcock wrote, “The shifts in her style, like loops of a spiral, are always introducing us to something new; and usually to something better.”

“Phyllis Webb is one of the finest poets now writing in Canada,” wrote Stephen Scobie. “In fact, dropping the academic equivocation, she is the finest.” Scobie has claimed Webb’s writing “has always been distinguished by the profundity of her insights, the depth of her emotional feeling, the delicacy and accuracy of her rhythms, the beauty and mysterious resonance of her images—and by her luminous intelligence.”

In ‘Evensong’ she once wrote, “Tending towards music / the artist’s life tends towards solitary notes / slips of the tongue, hand, eye eerily like / intelligence of higher orders.” Webb published two collections of non-fiction and had her work translated into Urdu, Dutch, German, French, Swedish, Finnish, Gujurati and Spanish. The Vision Tree: Selected Poems received the Governor-General’s Award for Poetry in 1983.

Having edited and written the introduction for Phyllis Webb’s Selected Poems (Talonbooks 1971), John F. Hulcoop has stayed the course, contributing a book-length study, Phyllis Webb and Her Works (ECW Press 1990). Fortunate to have such a devoted critic as the nineteeth-century poetry scholar Hulcoop and such a devoted publisher as Talonbooks, Webb has now re-emerged as a poet after a hiatus of more than thirty years with a single volume of all her published, unpublished and uncollected works, Peacock Blue: The Collected Poems of Phyllis Webb (Talonbooks 2014), once again edited by Hulcoop. She attended an event in her honour at the Vancouver Writers Festival, in conjunction with the launch of the book, in 2014. The all-encompassing overview of her work came thirty-four years after the eminent Ontario critic Northrop Frye hailed her collection Wilson’s Bowl as “a landmark in Canadian literature” in 1980.

Books about Phyllis Webb are: