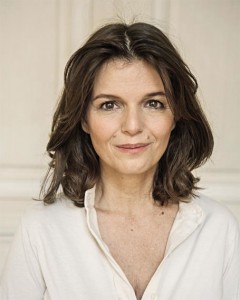 Talonbooks is calling it a Septuple Launch.

On Wednesday, November 12 at Pyatt Hall in the VSO School of Music at 843 Seymour Street in Vancouver, doors will open at 7:30 for a celebration of seven new books:

Jessica Moore will read from the only novel on this fall’s Talonbooks roster: Birth of a Bridge, which she has translated from French to English. The author of Birth of a Bridge, Maylis de Kerangal, was one of the featured authors at this year’s Vancouver Writers Festival.

Maylis de Kerangal is being touted as one of France’s most exciting new novelists.e Birth of a Bridge is her story of a handful of men and women of various backgrounds and classes, who assemble around the construction of a giant suspension bridge in Coca, a fictional city somewhere in a mythical and fantastic California. Told on a sweeping scale reminiscent of classic American adventure films, this Médicis Prize–winning novel chronicles the lives of these individuals, who represent a microcosm of not just mythic California, but of humanity as a whole. Their collective effort to complete (or oppose) the mega-project recounts one of the oldest of human dramas, to domesticate – and to radically transform – our world through built form, with all the dramatic tension it brings: a threatened strike, an environmental dispute, sabotage, accidents, career moves, and love affairs … Here generations and social classes cease to exist, and everyone and everything converges toward the bridge as metaphor, a cross-cultural impression of America today.

De Kerangal’s writing has been widely praised for its scope, originality, and use of language. Her rich prose plays with different registers (from the most highly literary to the most colloquial slang) as well as speed and tension through grammatical ellipsis and elision. She employs a huge vocabulary and invents new relationships between words in a completely innovative use of language.