“We pulled cedar bark from great trees in the spring, learned how to twine or weave headdresses, cooked in steam-bent boxes, gathered, sniffed, tasted and tried, all the while gaining a respect for the complex culture of coastal native peoples.” – Vickie Jensen 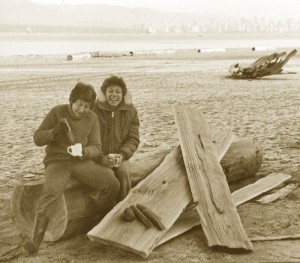 Hilary Stewart (left) takes a break from splitting shakes on a frosty morning for her book Cedar. She has died at age 89. Her fellow coastal historian Vickie Jensen (right) offers an appreciation.

Hilary was both a close friend and a mentor to me.

Over decades of drawing, photographing and writing, she produced a shelf-full of resources on Northwest Coast native culture that were read, collected and utilized by First Nations peoples, academics and ordinary folks intrigued by the unique aboriginal culture of this coast.

Hilary believed in learning by looking and doing. Indeed, her book research spilled over into workshops, demonstrations and one-on-one sessions that taught so many, from First Nations artists and docents-in-training, to elementary students and amazed tourists. Despite having no academic credentials in archaeology or anthropology, Hilary became an expert about everything she wrote. A founding member of the Archaeological Society of British Columbia (ASBC), she volunteered on an archaeological dig on the banks of the Fraser south of Hope, producing meticulous drawings of the artifacts being unearthed.

Her work caught the attention of Dr. Charles Borden, UBC’s first archaeologist, who encouraged her to publish them in book format. The result was Artifacts of the Northwest Coast Indians (Hancock House 1973), later revised and reissued as Stone, Bone, Antler and Shell (D&M 1996), a resounding success that was also the first comprehensive record of such information. When working on Indian Fishing (D&M 1977), she interviewed native fishermen and searched out historic collections of fishing equipment, then proceeded to create all the lures herself. Not content with that, she took her halibut hook to the Vancouver Aquarium and got permission to test it out. In the process she discovered that halibut hooks floated up rather than down from their anchor line. But what pleased her most what the tooth marks left by a halibut that couldn’t resist the temptation of her lure.

In the early 1980s Hilary was thick into the research for her epic resource Cedar (D&M 1984). One frosty morning, she called and asked if I was busy. I immediately cleared my schedule as she explained that she’d asked the Vancouver Parks Board to be on the lookout for a sizeable cedar drift log so she could attempt splitting cedar planks from it, just like in the old days. They’d just found such a log. So armed with stone hammers and an array of fire-hardened yew-wood wedges she’d made, we set off for Jericho Beach.

It was a morning forever etched into my memory, stepping back in time as we drove those wedges into the straight-grained wood and then re-set them further along as the long house planks began to split off the log. “I knew we could do it!” she beamed.

Hilary treasured the relationships she made with First Nations peoples while researching her books. Many are referenced in her books. But the impact of those teachings continued long after publication. Karen Duffek of UBC ‘s Museum of Anthropology recalls Skidegate cedar-bark weaver Vicky Moody telling her that Cedar had in fact changed her life. Initially, she knew nothing about weaving, but the book’s precise illustrations and text encouraged her to try. She then went on to incorporate those techniques in her own innovative works, many of which are now in museum collections.

Hilary’s main publisher Scott McIntyre noted, “One happy outcome of Hilary’s deep love of this place, her First Nation friends, and the remarkable culture which flourished here is that the nine books of hers we were privileged to publish have sold over 600,000 copies in some ten countries and several languages. Imagine, as but one example, a book which teaches the Japanese how to fish!”

Certainly Hilary Stewart was pleased with the honours her books and endeavours earned, but she was also especially proud that she was able to make her living as a writer. Always frugal, she bought land and built a house nestled among the ferns, trees and creatures of her beloved QuadraIsland. There she produced her final book, On Island Time (D&M 1988).

Hilary Stewart was born in St. Lucia, West Indies, on November 3, 1924. After attending boarding school in England, she spent six years in the armed forces, during and after the war. Upon completing studies at St. Martin’s School of Art, she followed her brother, Peter, to Canada in 1951. She worked as an artist for CHEK TV and became increasing fascinated in the art, artifacts and cultures of the First Nations peoples of the Pacific Northwest. Long associated with the Archaeological Society of BC, she produced twelve books.

Stewart lived for many years on Quadra Island but was forced to move to Campbell River after a stroke. She spent the last five years of her life in a nursing home in increasingly frail health. She died on June 5, 2014. Hilary Stewart was pre-deceased by her brother Peter and her sister Heather. She is survived by her sister in-law Anna Stewart, her niece Robyn Stewart and her nephew Ian Stewart.

“Hilary Stewart was one of those unique talents who was equally distinguished as a writer and a graphic artist,” said her final publisher, Howard White. “Her keen study of aboriginal cultures of the BC coast led her to make a major contribution to popular understanding.”

In lieu of flowers for a celebration of Stewart’s life on June 21st at the Quadra Island Community Centre, friends and admirers were urged to make a contribution to the “UBC Museum of Anthropology” for the Hilary Stewart Endowment Fund for First Nations Education Programs. Winner at the 1985 BC Book Prizes for her book Cedar

Certificate of Merit for Indian Fishing and Looking at Indian Art

James F. and Margaret Pendergast Award for contributions in Archaeology

Looking at Indian Art of the NorthwestCoast (Douglas & McIntyre, 1979) Gathering What The Great Nature Provided, by the ‘people of Ksan’ (Douglas & McIntyre, 1980)

One Response to “Cedar, totems, Jewitt & other gifts”