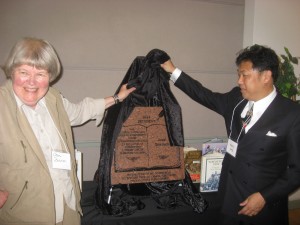 B is for Barman
Jean Barman is the 21st recipient of the George Woodcock Lifetime Achievement Award for an outstanding literary career in British Columbia. She received her $5,000 prize at the Vancouver Public Library in a ceremony that included VPL’s Chief Librarian Sandra Singh, former VPL Chief Librarian Paul Whitney (representing Pacific BookWorld News Society) and Councillor Kerry Jang representing the City of Vancouver. After Councillor Jang read a civic proclamation declaring Author Appreciation Day, Barman delivered a retrospective summary of her 21 titles, discussing how her books came to be written, her approach to writing history and her relationship with the province. “As a child growing up on the prairies,” she recalled, “I dreamt of faraway British Columbia. Totem poles and snow-capped mountains, as depicted in the pages of the National Geographic magazine, symbolized the west coast … I fell in love sight unseen with this west beyond the west. Only in adulthood was I fortunate enough to come to live in British Columbia. Residence has not dimmed the attachment formed as a child. British Columbia continues to fascinate, in part because it so often presents an enigma. Reality and perception, the geographic entity and its social construction, Vancouver as a cosmopolitan city amidst one of the world’s last frontiers – they all come together into an intriguing whole that is British Columbia.” Co-sponsor Yosef Wosk was also present along with UBC Press publisher Melissa Pitts who will release Barman’s next book, a ground-breaking investigation of the early French presence on the West Coast, French Canadians, Furs, and Indigenous Women in the Making of the Pacific Northwest (UBC Press 2014). The annual Woodcock Award is co-sponsored by the Writers Trust of Canada, an organization that received a donation of approximately $2 million from George & Ingeborg Woodcock to aid in the support of independent authors of Canada. Each year a new plaque of B.C. marble is added to the Main Library’s Walk of Fame to commemorate each new recipient of the Woodcock Award.