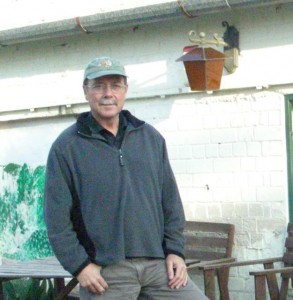 In his novels, Steven Hunter uses landscape imagery from his home at Big Lake, which is located on the Cariboo gold rush trail about 55 km northeast of Williams Lake. His first book, The Cameron Ridge Conspiracy (self-published 2014), is about a young Shuswap (Secwepemc) girl who witnesses the murder of her brother and sister at the hands of three miners in 1859 during the Cariboo Gold Rush. In the story, Silvercat Lake is the pseudonym for Big Lake. In Strings, Hunter’s characters also call the Cariboo home, but they couldn’t be more different from those in his first title.

The new protagonist is an aging musician in the early 21st century, Beckett (Beck) Trumaine, who encounters sophisticated thieves engaged in violin fraud, theft, forgery, money laundering and all manner of deceptions in the trade of rare and valuable stringed instruments. Beck’s journey takes him to San Francisco, but home is Michelle Lake. It’s really Big Lake again and there is no shortage of scenes that draw on the wealth of natural images that Hunter himself encounters on a daily basis.

The plot for Strings begins with Beck  at a defining moment in his life. His music composition has stalled due to writers block. His frustration and dark moods are wearing on his long marriage. He begins to investigate his deep musical roots and becomes consumed by the quest.

Beck seeks out an old friend who owns an instrument brokerage and violin shop in San Francisco. The ‘Duke’ as Beck’s friend is nicknamed, is a genius at authenticating rare and valuable stringed instruments, one of a handful of experts on the continent. With his wife’s reluctant blessing Beck heads to San Francisco to work with Duke and learn all he can.

Part of Beck’s job there entails transporting elite instruments between the Duke’s shop and the brokerages of two other well known experts. It’s not long before Beck realizes that he’s embroiled in an international network of thieves who are dealing in stolen instruments, issuing phony certificates of authenticity, and money laundering.

Steven Hunter and the Cariboo

Both of Hunter’s novels begin and end at Big Lake. The names of the lakes are changed but the images are drawn directly from the place he has called home since 1991. As a columnist for BC Outdoors magazine, he has contributed works of short fiction that all depict life in the Cariboo.

Big Lake is a community of approximately 500 people, founded in the early 1900s. “Moose forage in our yard winter nights,” says Hunter. “Bears get into our deep freeze. Loons holler. We live on the lake so we kayak, swim and fish. We grow about half of the produce we eat and we know the people that raise our beef, raise our chicken, gather our eggs and grow our lamb.”