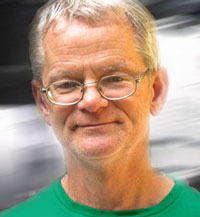 Grant Buday was announced as the winner of the third Great BC Novel Contest for Atomic Road (to be published in 2017), about a fast-paced car journey from New York to Saskatchewan at the height of the Cuban Missile Crisis in 1962.

But the award was rescinded and the competition cancelled due to legal matters that were not disclosed.

Mona Fertig was not able to discuss the nature of the dispute that arose regarding the manuscript in question.

The passengers in that novel-to-be include Clement Greenberg, an art critic (on a mission to murder his rival Harold Rosenberg), the French marxist philosopher Louis Althusser (who, in real life, was convicted in 1980 for murdering his wife) and a contract killer. Publicity for Atomic Road describes it as “delightfully twisted storytelling”. Clement Greenberg, perhaps the greatest art critic of the 20th century, actually did travel to Saskatchewan from New York in 1962, but not to murder anyone. He went to participate in the Emma Lake Artists’ Workshops, summer art classes held in a park-like setting north of Regina, which are affiliated with the University of Saskatchewan. Originally started in 1936, the more famous sessions began in 1955 when artists Kenneth Lochhead and Arthur McKay were teaching at the university.  Many view Greenberg’s visit as a pivotal moment in Canadian art and development of our own modernist art. His visit certainly helped build a connection between Western Canadian artists of the time and the red hot New York art scene.

The third but aborted contest was administered by Mother Tongue Publishing of Salt Spring Island B.C. The short list judges, Bill Gaston and Kathryn Para, read 56 manuscript submissions from B.C. writers, before handing over three short-listed novels to Pearl Luke to read and choose a winner. As the winner, Buday would have received a publishing contract with Mother Tongue Publishing, a $1,000 advance, regional book launches and readings, media coverage, and publication of their novel in a beautiful trade paper edition.

Buday has published ten books. His most recent published novel The Delusionist (Anvil 2014) was shortlisted for the Eric Hoffer Book Award, the City of Victoria Butler Prize and the Kobzar Award. At the time of the contest, he was living on Mayne Island with eight chickens, three cats, three goats, and two people.

Buday was the author of several educational books for juveniles, such as Exploring Wildlife in Western Canada, when he drew upon his experiences travelling in Asia to write a first novel, The Venetian (Oolichan, 1987), about Marco Polo and his relationship with Kubla Khan. In it, Buday speculates as to how Marco Polo must have reacted to experiencing a different culture. He takes a more prickly and modern perspective in his memoir of travelling alone in India, Golden Goa (ECW Press, 2000), in which he tracks 16th century Portuguese poet Luis Camoens, author of the Lusiads, Portugal’s national epic. He has also published a collection of chronological stories with common characters, Monday Night Man (Anvil Press, 1995) and the novels, White Lung (Anvil Press, 1999), A Sack of Teeth (Raincoast, 2002), Rootbound (ECW Press 2006) and Dragonflies (Biblioasis 2008). In Rootbound, Buday’s 50-year-old bankrupt and paranoid former building contractor turned reluctant pot-grower goes from ‘bud’ to worse. As if it isn’t hard enough these days with Hydro checking everyone’s electricity consumption, poor ol’ Willie LeMat, a down-on-his-luck Willie Loman for the entrepreneurial new Millennium, gets his first crop filched and he has no economic alternative but to grow another one and remain ever-fearful it, too, will be poached. His daughter is pregnant by a Burmese monk, his usurious landlord is a conman and his girlfriend paints only self-portraits; meanwhile purblind losers like LeMat, trying to scrape by, are surrounded by real estate speculators making bundles from an Olympics in 2010 that has already gone way over budget. All this would be funny if only it wasn’t all-too-plausible.

Never one to shy away from the truth in his fiction, Grant Buday recalls Stalin’s systematic starving of two million people in the Ukraine in the 1930s—known as the Holodomor—in his novel about Cyril Andrachuk, the only Canadian-born son of immigrant parents, in The Delusionist (Anvil 2014). Set in Vancouver in 1962, Cyril struggles with menial labour jobs during the day but draws incessantly and longs to attend art school. His mother can’t imagine why Cyril wants to draw his late-father’s tools—saws, drills, hammers, wrenches—and questions his sanity when he begins a series of large, commemorative “Stalin stamps” amid growing family distress. For anyone puzzled about the current headlines involving Russia and Ukraine, this darkly comic novel is a potent reminder why few people can never escape from history, even at the western edge of European migration.

Critically well-received, but too downbeat to be trendy, Buday won the 2006 Fiddlehead Magazine short fiction contest.

Review of the author’s work by BC Studies:
Stranger on a Strange Island: From Main Street to Mayne Island