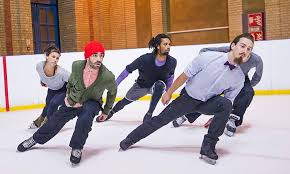 For those who prefer going to the dentist rather than watching ice dancing, we have a show for you.

Le Patin Libre delivers on its promise not have any crooked Soviet judges, sequins or ghastly permanent grins.

This Francophone quintet—including one skater from B.C.—brings modern dance to the rink with no props, fuss or pretension. And when it’s over, the five skaters take down the lighting, acting as their own roadies.

There are two parts to the show.

First we sit in the bleachers, as we would do for a hockey game. Our elevated perspective enables us to appreciate the playful geometry of Le Patin Libre as a fivesome constantly splitting, re-uniting, splitting, re-uniting, and always taking breaks from anything resembling flair or contortions to return to the pure joy of gliding to and fro.

Individuals splinter from the unit and return. But there is no storyline as if it’s a ballet. Instead the emphasis is on a collaborative spirit of five people in a van stopping on the edge of a highway, finding a frozen pond, donning their toques and mittens, and improvising patterns and idiosyncratic movements.

Sometimes they move like a flock of birds; other times they could be like those jet planes that perform overhead at air shows, constantly moving, gliding, in prescribed patterns, taking pleasure in the expanse of sky. We know the routine is choreographed but Le Patin Libre gives the impression that their unison is non-militaristic, a tad mischievous. There are no gags, no attempts at crowd-pleasing humour with buffoonery. But it’s anti-show biz.

Our innate desire for story makes us view skaters as characters, particularly when they engage with one another. One skater is distinctly tall, thin, gangly. His is a mesmerizing and commanding presence, largely because he takes up more space. But there’s also one female skater, and she has her own style of grace, literally keeping up with the strenuous, non-stop physicality of the men with seeming ease. Another male skater has the speed and jumping ability of a conventional, competitive male skater.

Still another skater doesn’t grab the spotlight at all, instead he retains his identity within the group. It turns out he created the unique, ever-present soundtrack for the show—and he has taught himself how to skate so he can participate. So instead of having one style, Le Patin Libre is a potpourri, a commune, avoiding hierarchy.

After intermission for hot chocolate, the audience moves to chairs and cushions at ice level at one end of the rink. It’s chillier. There is a misty fog. The skaters have changed their clothes but they are not wearing outfits that overtly grab attention. This time there is far less exploration of geometrics; they often come close to us, at eye level, so we can see their faces. Only one of them smiles.

Several skaters do star turns, each emphasize their own styles. Again, it is the gangly male who is most memorable, most odd, stabbing the ice with his skates, propelling himself sideways like some peculiar crab on the ocean floor. The percussive tricks or inventions of Le Patin Libre are movements that even Toller Cranston could not have imagined. It’s a bit like watching the Harlem Globetrotters. By breaking the ice dancing rules, they make the game more fun.