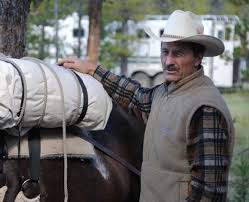 Stan Walchuk, Jr. is a biologist but don’t imagine some guy in a white lab coat.

Walchuk took his first solo wilderness trip at the age of 13. His adventures since then include being charged by grizzlies four times; falling through ice and being swept down rivers; being set afloat on an island of ice; brawls and a Bigfoot encounter. As a young adventurer.

Also a teacher and filmmaker, as well as a guide and outfitter, Walchuck has gathered his exploits and wilderness prowess for Common Man, Uncommon Life (Vista, 2017), a forthcoming, 700-page memoir with 33 chapters.

“And you should see the stories that didn’t make the book,” he says.

Born and partly raised in Edmonton, Walchuk spent most of his life in the outdoors, often on a horse. His major achievement prior to the forthcoming autobiography is Cordillera! (Vista 1982), a book and a documentary about an epic trip he took as a young man. He crossed eleven mountain ranges, more than twenty rivers, and the breadth of the continental mountains through Alberta, B.C., and Alaska – all captured on film.

Walchuk has written more than fifty articles for horse and outdoor magazines including The Canadian Horse Journal, Pacific and Prairie Horse, Saddle Up, The Equine Trader, Western Horse Review, and Bowhunter Magazine. He holds degrees in biology and education from the University of Alberta.

Walchuk has settled in the B.C. interior town McBride, where he is the owner and operator of Blue Creek Outfitting, with his wife Marlene. His previous books are Cordillera! (Vista, 1982) and Trail Riding, Packing and Training (Blue Creek Outfitters/Sandhill).