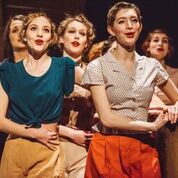 Based on the novel by Bradford Ropes

42nd Street on 49th Avenue is a delightful, dizzying triumph. The verve and intelligence of this Barbara Tomasic-directed, feel-good production is cumulatively astonishing. Make her a star.

We will not report the Studio boss to the SPCA (Society for the Prevention of Cruelty to Actors-in-training) for forcing more than a dozen kids to successfully learn much-better-than-adequate tap dancing skills—while simultaneously attending their regular classes. It’s a small miracle-in-42nd-Street the way they can gleefully romp their way through this non-stop parade of exuberant prancing as if they were all born a hundred years ago.

The singing is not the greatest show on earth; but the manner in which Tomasic has smartly (and, we suspect, kindly) convinced her cast to buy into a collective mentality is first rate—as are the sets by Pam Johnson, choreography by Julie Tomaino and musical direction for a band led by Christopher King. And those costumes!

For this one, Studio 58 could offer a door prize for any patron who can correctly guess the number of costumes used in this production and no one would ever win. Not only does costume designer Carmen Alatorre deserve some sort of prize—but, hastened by her work for Jovanni Sy at Richmond’s Gateway Theatre, Tomasic deserves dollops of major recognition for her recent climb towards the top tier of direction for musical theatre. The psychic cohesion for such a production doesn’t happen by accident. This cast has been simultaneously nurtured and challenged in equal measures. The theatre program at Langara overall has generated a climate into which someone like Tomasic and King and Tomaino can enter as strangers and quickly thrive as mentors and ringleaders.

Act II is less impressive than Act I. The ending needs work. And we can’t expect people in their twenties to convincingly portray much older characters. But, jeepers, this blitz of retro nonsense succeeds in making the audience smile during almost every scene. The gals on a train peeping behind curtains from their sleeper car beds is especially charming.

It’s 1933. Decisive and dedicated musical theatre director Julian Marsh needs a hit. He’s hitched his professional wagon to a fading star, Dorothy Brock, who has convinced a dumb but rich sugar dandy to fund the production—and everyone agrees it’s a good idea to keep her boyfriend out of the picture. They’ll have to open in Philadelphia before their scheduled New York debut. She breaks a leg.

During rehearsals, Peggy, a newly-arrived chorus girl from Allenton, Pennsylvania, is blamed for a collision on stage that breaks Brock’s leg. Peggy is fired. Marsh declares the enterprise dead in the backwater. But with all the enthusiasm of Spanky & Our Gang high on glee club gin, the never-say-die cast convinces the hard-ass Marsh to give that super-talented Allentown gal a chance to learn the lead role in 36 hours. Marsh goes to the station himself to get her back. During their heated, marathon rehearsal blitz, he shows her how to kiss.

The show must go on, virtue and talent must be rewarded, and the dictatorial maestro must be shown to have a heart of gold underneath his bluster. This Cinderella Americana hokum is the polar opposite to the recent, laudable onslaught of ground-breaking theatre in the PuSh Festival. But, by golly, it sure as heck made a lot of reasonably intelligent people go home happy. There are two standouts in the cast who galvanize attention; but this is a collective accomplishment.

One Response to “Break a leg, literally”