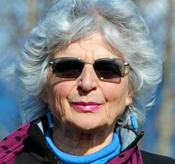 While living in Telkwa, B.C., Joan Haggerty has completed a novel with a long incubation period, The Dancehall Years (Mother Tongue 2016). Slated for publication in June, it’s a distinctly British Columbian family saga that follows the reverberations of the forced evacuation of Japanese Canadians from the coast. Young Gwen Killam has enjoyed her idyllic summers on Bowen Island until she can’t fathom the sudden disappearance of her swimming teacher Takumi Yoshito, along with his parents who have had a solid reputation as gardeners on the island. The novel traces family dynamics from the Depression, to Pearl Harbour, to the 1980s. Born in Vancouver in 1940, Joan Haggerty spent her formative years “on the coast in cedars and salt water,” graduating from University of British Columbia with a B.A. in English and Theatre in 1962. For the next ten years she lived in England, France, Spain and New York City. During this period she wrote and published a non-fiction book about teaching, Please, Miss, Can I Play God?: Notes and Sketches on an Adventure in Dramatic Play (London: Methuen, 1966; New York: Bobbs-Merril, 1968). This was followed by an experimental feminist novel about childbirth, Daughters of the Moon (Bobbs-Merril, 1971), that was praised by Marge Piercy and John Irving.

Joan Haggerty returned to B.C. where she taught in Roberts Creek, Vancouver and Houston, B.C. In 1994 she published The Invitation (Douglas & McIntyre), a memoir about re-uniting with the child she gave up for adoption. It was nominated for a Governor General’s Award in 1994.