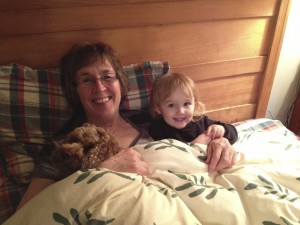 LOCATION: Mile 18. To reach the vicinity of “Mile 18” in reference to Ann Blade’s book called Mary of Mile 18, you go to Mile 73 of the Alaska Highway, north of Fort St. John, and take the Beatton River Road turnoff–then you drive for eighteen miles. The hamlet where Ann Blades taught school was dubbed Mile 18 simply because that’s the distance, along a gravel road, to get back to the highway. [Featured image: Ann Blades with grandchild Aralyn]

B.C.’s maven of children’s literature, Judith Saltman, has designated Ann Blades’ self-illustrated Mary of Mile 18 (1971) as the “breakthrough” illustrated title by a B.C. writer for children. The published-from-Montreal story is based on Blades’ experiences as a novice teacher in northern B.C. Her second book in 1973 was similarly derived from her teaching experiences in tiny Taché.

Blades says she wrote Mary of Mile 18 at age 20 partly because she was bored but mainly because she couldn’t find any books that came close to representing the lives of her students. That’s why she imagined a story about a girl named Mary–based on a real Mary in her one-room classroom–who finds a wolf pup but is forbidden to keep it as a pet until it proves its worth on the family farm. Blades says she was inspired by the illustrations in Harald Wiberg’s The Tomten and the Fox. For PR purposes, her publisher at Tundra described Mile 18 as a Mennonite community, but in fact this was not true. It was a farming community with some Mennonite families. There were also three families working for and living in houses built by Westcoast Transmission. In the early 1970s there was a shortage of teachers in B.C. so it was possible to get a Letter of Permission to teach in an isolated area if you had a BA, no teaching experience required. This was how Blades’ then-husband was hired to teach grades 4 to 7 (with a few students in grade 8 taking correspondence courses) in the two-room school at Mile 18. Blades had a standard teaching certificate after one year of Arts and one year of Education courses which included a two-week practicum. She taught 25 children in grades 1 to 3.

“I went there as a 19-year-old,” she recalls, “turning 20 in November. We lived in a teacherage adjacent to the school with no indoor plumbing or running water. It was propane only until electricity arrived in December. It was very bleak, relatively flat countryside. The isolation was extreme and it was a difficult year.

“There was the original one-room schoolhouse in which I taught, and a newer building for grades 4-to-8, as well as a barn and two outhouses; one for the boys and one for the girls. Often it was 40-below. About 100 yards away there was a garage and a tiny shack of a store.”

Blades and her husband travelled to Europe the next fall but when they ran out of money they returned to take jobs at a two-room school at Taché after the teachers there had suddenly left in November. “Normally they wouldn’t have hired us as we weren’t Catholic,” says Blades, “and it was a Catholic reserve but they made an exception as they knew we would stick it out since we had experienced teaching in an isolated location.” The Vancouver Art Gallery exhibited paintings from Mary of Mile 18 and the Canadian Association of Children’s Librarians chose it as Book of the Year in 1972. It has since been reprinted in several languages and became the basis for a film made by the National Film Board in 1981.

Noteworthy among Blades’ more than twenty titles is the enduring and charming picture book, A Salmon for Simon (1978), with text by Betty Waterton. It was the first published-in-B.C. children’s book to win a Governor General’s Children’s Literature Award for illustration. It also received the Amelia Frances Howard-Gibbon Illustrator’s Award.

By the Sea: An Alphabet Book (1985) won the first Elizabeth Meazik-Cleaver Award for Illustration. Other significant titles for which she provided illustrations include Ainslie Manson’s A Dog Came, Too, Michael Macklem’s Jacques the Woodcutter, three titles by Sue Ann Alderson and children’s books by Margaret Laurence, Margaret Atwood and Cariboo pioneer Jean Speare. Ann Blades’ illustrations were also featured in an exhibit of Canadian children’s book illustrations in 1990 at the Bologna Children’s Book Fair in Italy. The garage and store at Mile 18.

Born on November 16, 1947 in Vancouver, Ann Blades received her teaching certificate from the University of British Columbia (1970) and she graduated as a nurse from the British Columbia Institute of Technology (1974). She has lived in Crescent Beach, a childhood haunt that she wrote about in her book, The Cottage at Crescent Beach. Starting in 2000, she spent two years re-certifying as a teacher. Thereafter she has enjoyed teaching inner-city kindergarten full-time in Surrey.

The Mile 18 school amalgamated with Buick Creek School to become Beatton River School. Blades has not been back but she has had some contact with former Mile 18 students. The character Mary in her first book was inspired by a girl named Mary in the class.