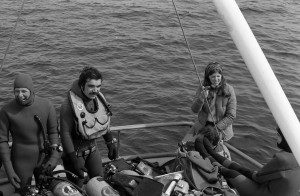 Betty Pratt-Johnson, at left, on a dive at Powell River, circa 1976, with coastal author Rick Harbo.

Pratt-Johnson’s where-to-go divebook 151 Dives has been the Bible for divers and snorkelers from Olympia, Washington to Seymour Inlet.

“I decided to write the very book I wanted to buy.” — Betty Pratt-Johnson

Born on July 16, 1930 in Evergreen Park, Illinois, BettyPratt-Johnson attended Purdue University. She learned to dive in 1967 at the YMCA in Vancouver when there was only one dive shop in the city. She was certified #55 on the BC Safety Council and certified as Sport Diver 363 by NAUI in 1973.

First released in 1976, her authoritative guide to scuba and skin diving in B.C. and Washington, 141 Dives, has been reprinted and updated many times. In 1994 it was re-released in two volumes, 99 Dives and 101 Dives. It was revised as 151 Dives (2007), available via Sandhill Distributing. “I decided to write the very book I wanted to buy,” she said. “And it was a great excuse to go diving.”

Her distributor Nancy Wise of Sandhill recalls, “I remember the first time she arrived at the office driving an ENORMOUS truck and camper – her other home on wheels. It was impressive, certainly daunting to me, yet she thought nothing of driving it. She drove it across Canada not long after.

“And when she opened the camper door, the place was full of book boxes which we then unloaded into the warehouse. She was definitely her own person and full of fun. She was extremely intelligent and open to learning new things about the book business which had changed considerably since the release of her last book.

“Previous to meeting her, we spent much time on the telephone talking about the book contents and she was determined that even the smallest detail be absolutely correct. After the book came out, she was extremely helpful in terms of suggesting retail accounts that would want to carry her book. I liked her very much.” Betty Pratt-Johnson also wrote books on whitewater trips for kayakers, canoeists and rafters. When she wrote Whitewater Trips and Hot Springs for Kayakers, Canoeists and Rafters in the Kootenays of British Columbia (published in 1989), on the first page Pratt-Johnson wrote, “Once you’ve been here you’ll never leave this place. It will never leave you.” She eventually settled in the Kootenays, moving to Kaslo in 1997.

Back in 1976, when her first diving book appeared, she became a Contributing Editor for the new Pacific Diver magazine, now Diver magazine, and wrote for every issue for 6½ years. She has also dived in many parts of the world from the Red Sea to the East China Sea in Okinawa; Greece and Formentera in the Mediterranean; Hawaii, Japan, Indonesia, Fiji and the northern Great Barrier Reef in Australia; Bonaire, Martinique, Jamaica, Mexico, Bermuda, Andros and Eleuthera in the Bahamas; Brazil, Tobago, Colombia, the Galapagos Islands and freshwater lakes in Alberta.

“In 2002 I put my foot in the door of technical diving when I certified for nitrox,” she said, “and have dived with it ever since.” She was certified as Nitrox Diver 76578 by Technical Diving International. Pratt-Johnson also undertook conservation work with Pacific Diver magazine and Paddy Sherman, then publisher of The Province newspaper, and dived at the first underwater reserve in the U.S at Point Lobos State Reserve, and joined the campaigns to establish three underwater parks in Japan, and diving programs in Greece (where removal of any artifact is illegal). “There is still no underwater park with complete protection in Canada,” she noted. “Part of the problem is unresolved First Nations land claims in British Columbia. Most First Nations bands are environmentally aware and when their age-old claims have been sorted out probably Race Rocks will become the first completely protected underwater park in Canada.”

According to her own marketing material: “151 Dives is a where-to-go guidebook for scuba divers and snorkelers throughout the vast inland sea ranging from Olympia, Washington, north to Seymour Inlet, Canada: sites are described for all skill levels from new divers to experts; many locations are also enticing for technical divers. Details for 74 shore dives and 77 boat dives, 17 reachable by dive-kayak, are included with GPS locations for all boat dives. Every site description starts with the all-important WHY GO section that highlights what’s special about it so readers can easily choose a dive that interests them. Details follow: photos and nautical charts, tide and current tables, bottom and depths, hazards and how to deal with them, and, how to reach the site. Service information listings included: dive shops offering recreational instruction and technical instruction for nitrox; rebreather and trimix; sources of air, nitrox, trimix and soda-lime. Boat charters, day, multiple day and liveaboard. Boats rentals and launch ramps. Dive resorts. Pacific Northwest waters are safe – marine life is unthreatening; minor injuries occasionally occur when a diver does not know when, how or if it is appropriate to approach an animal – thus hints are throughout this book to inform. If a diver pokes a hand into a dark hole without looking inside first, he or she might have invaded the home of a wolf-eel and be bitten; or, if trying to stroke a lingcod on eggs, could provoke an attack. Many cautions about how to respect the underwater creatures, yet how to see them, are in this guide; one dive description details when and how to meet Steller sea lions; another how to see sixgill sharks. This guidebook encourages un-intrusive and rewarding viewing of marine life, artificial reefs and wrecks. With these dives as a basis, divers can explore endlessly for their own sites.”

Her many speaking engagements included:

When she was longer able to dive at age seventy-nine, due to her eyes, Pratt-Johnson was busily researching another book project, “Little Walks Across Canada. It was started in the summer of 2008. She went first to Inuvik and Tuktoyaktuk. “I am a total optimist,” she said, “and I love the process of researching books and writing them. I walk a lot — almost every day when at home. Lots more when I’m working. The “Little Walks” are no longer than one hour round trip but I do a lot of exploring to get the right ones and to write accurately about them.”

Betty Pratt-Johnson died peacefully at the age of 84 at the Shuswap Lake Hospital in Salmon Arm on October 21, 2014. Her twin sons Brian and Doug, born in Jamaica on February 17, 1960, were at her side.

According to Peter Vassilopoulos, the founder and former publisher of Diver Magazine (Canada), Betty Pratt-Johnson was the first freelance writer to present Pacific Diver magazine with an article on scuba diving in local BC waters. “It was 1975,” he recalls, “and the magazine had just been founded and published in Vancouver. I was thrilled at her enthusiastically-written and well-illustrated articles depicting local divers actively embarking on their underwater adventures in the Pacific Northwest. One of her earliest pieces had her diving with friends out of a campground at Powell River. It was the beginning of a series and of a substantial business connection with members of the hotel and travel industry that would turn the magazine into a well-respected publication throughout North America.”

Betty Pratt-Johnson’s regular features included travel to distant locations, places that had never considered diving as a tourism component in the past, and soon the magazine took on a national circulation under the new name of Diver Magazine. “She was one of the first, if not the first, freelance writing diver to travel to Mexico,” says Vassilopoulos, “search out diving opportunities and make connections with fishermen and others who would turn to recreational diving as a business in the future. Her contributions to the magazine and to the sport of recreational diving took her from freelance to friend and the staff of the magazine enjoyed many festive occasions diving, travelling and socializing with her. Betty’s interest in other recreational activities, along with her involvement in diving led to the methodical research, writing and publishing of a number of books in her chosen fields. She will be missed but her books will keep her memory alive indefinitely.”

(“The original book went to eleven printings from 1976 through 1992 before being taken out of print in early 1994 in order to be updated and expanded to become the new companion volumes, 99 Dives and 101 Dives. Later 151 Dives went into print in September 2007 and sold 3,000 books to the Mountaineers Books in Seattle.” — BPJ)