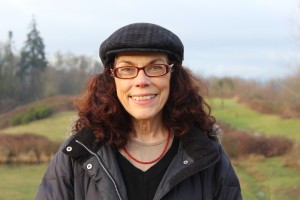 Susan McCaslin with Olga Park, circa 1980, courtesy of Mark Haddock]

Now retired from teaching, Susan McCaslin (in photo) of Fort Langley has released Into the Mystic: My Years with Olga (Inanna $24.95), described as a spiritual memoir in poetic prose. It focuses on McCaslin’s spiritual mentor, Olga Park (1891-1985), who self-published several titles about direct mystical experiences “grounded in and moving out from the Christian tradition with which she was most familiar.” McCaslin’s text provides much of Park’s life story, mixed with her own, through a series of vignettes and poems written by the author and by Park. It includes illustrations of Park’s spiritually-inspired artistic creations and it “explores the relation of the female spiritual seeker to her wisdom teacher, guru, and spiritual mentor, and addresses timeless questions about the relation of time to eternity, the nature and emergence of consciousness, direct mystical experience etc. in a contemporary Canadian context.” McCaslin’s new book will launched at the Canadian Memorial Centre for Peace on 16th and Burrard in Vancouver in January, 2015.  978-177133-188-3

Olga Park (1891-1985) was born in Gargrave, England (Yorkshire) but resided in B.C. from 1910 until her death in 1985. From 1964 until 1978 she lived as a solitary in a small rented, one-room cottage on Ioco Road in Port Moody, British Columbia. The poet Susan McCaslin knew her intimately from 1969 until her death in 1985, visiting her regularly during her Port Moody years and onward until her death. After Park had lived in Port Moody, she lived in various residences in east Vancouver. Her self-published books have been archived by the University of Manitoba in Winnipeg. She left many small, handmade booklets that remain undated. She also left McCaslin a filing cabinet of her unpublished records and writings. Susan McCaslin and her husband created a website on Olga at www.olgapark.ca