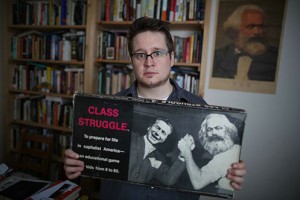 About half the shows one sees are duds or near misses. That leaves another 50% that one can possibly recommend, or at least nudge gently forward into the universe with some degree of enthusiasm.

Of the latter, one feels compelled to urge one’s closest friends to actually pay good money to see only one or two shows per year—not because they are “good” or impressive or innovative or even good for you—but because they uplift the spirit and you believe in them wholeheartedly.

Such rare shows are a godsend; they serve to make this sometimes awkward task of reviewing seem remotely sane. Why else would anyone endure so many wasted hours? Possibly addicted gamblers would employ the same rationale for their behaviour, but when you hit the jackpot, it makes perfect sense… Charles Demers’ write-of-passage is Leftovers, part of the PuSh Festival.

So Eureka! Charles Demers one-man show Leftovers makes perfect sense. I got it. Every second of it. Every point he made about the need for socialist values on a planet upon which just 62 people (53 of them men), own as much wealth as the poorest half of the entire world population made me want to shout hurray.

I wanted to cheer when Demers rebutted Margaret Thatcher’s claim there is “no such thing as society” by recounting his own family history of public health care enabling one-parent-raised kids to thrive.

I wanted to cheer when he noted that even though we think we’ve elected a progressive federal government our new finance minister is a guy who is married to a woman who will inherit the McCain family fortune.

I wanted to cheer when he expressed disdain for the decision made by the federal NDP under Mulcair to excise the word socialism from the party’s mandate and got themselves clobbered.

I wanted to cheer when he wondered aloud why this country probably won’t ever consider electing someone from the trade union movement whereas we’re happy to elect Trudeau II, born in Ottawa.

Finally, someone on a public stage who is not seduced or kow-towed by “free market” chicanery under the guise of liberalism.

Demers’ much beloved mother once imaged her son could be Prime Minister but, as he points out, he was born in Surrey. And his French Canadian father was gay. So he became a leftie in his teens. That somehow morphed into his stand-up comedian act as an overweight smartass.

Now part of the appeal of Leftovers is participating in Demers’ self-admitted transformation into a theatre artist. He is not entirely jettisoning the straitjacket of comedy to become a social activist, but he is allowing himself to finally say stuff in public that doesn’t have to always be funny. After a mawkishly amusing, Soviet-inspired, flag-waving opening number, Demers immediately tells us it was his director’s idea and he thought it was dumb. But later he includes a dance number.

One of the many highlights of Leftovers is watching Charles Demers boogeying to Tina Turner’s ‘What’s Love Got To Do With It.’ The shuck ‘n’ jiving might not be quite as expressive as Hugh Grant cavorting in the halls of 10 Downing Street to The Pointer Sisters “Jump (For My Love)” in Love Actually, but it is definitely a grown man feeling his oats.

Demers confides he wasn’t going to do the show unless he could dance.

It’s this ongoing interplay between the personal and the political that makes Leftovers into riveting entertainment. The cutesy title for the show is a bit weak and they gotta re-jig the lame ending, but the rest of it rocks.

From the moment Demers first appears on stage and informs us—before the show officially starts and he is supposedly doing the obligatory turn-off-your-cel-phones-please speech but he’s actually taking the trouble to make sure we like him—that we are about to see what will amount to an elongated TED talk “but way less hopeful,” I was hooked. I was not distracted or bored for one second. Born between the elections of Margaret Thatcher in Britain and Ronald Reagan in the U.S., Charles Demers he has been preoccupied with politics. Raised by a mother who could be “incandescent with rage,” Demers proceeds to encourage us to pay attention to our own rage and despair by sharing the dignity of his own abiding passion for distinguishing between right and wrong.

It amounts to a write-of-passage. Already the author of three books, Charles Demers is emerging beyond the boundaries of the funny, fat kid. Now he is a highly intelligent family man with much pride and fortitude who could never get himself elected as PM. He doesn’t have the hair or the family connections. But he can transform himself into a community leader. Along the way, like a politician who repeats himself on the hustings, Demers is not averse to recycling some of his jokes. While the doctor was stitching his mother’s torn perineum in the maternity ward, she turned to the medic and deadpanned, “Might as well stitch it all the way up, doc—nobody’s getting back in there.” Of course there is humour throughout, but it’s the intimacy of Demers’ broodings that makes Leftovers into a beguiling experience.

I have written thousands of theatre and book reviews that have some patina of objectivity. I try to avoid writing in the first person like this. But Leftovers is a show for which I feel obliged to gravitate to a personal endorsement.

Friends, you gotta see it.