Chatting up the dead 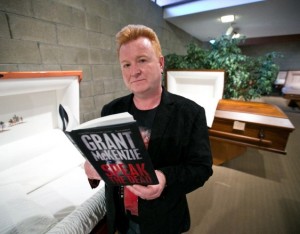 “Working with the homeless, I have attended more funerals than I like to count.” – Grant McKenzie

Who can argue against proliferating information about our books and authors?

The Vancouver JCC Jewish Book Festival would like you to know the submission deadline for their first Western Canada Jewish Book Awards is February 29th for titles published west of Ontario in 2014 and 2015 in the categories of Fiction, Non-fiction, Children & Youth, Poetry, Holocaust.​ Visit: (https://jccgv.com/content/wcj-book-awards)

You’ve gotta be a bit of a literary detective to unravel the complicated literary career of one of the CUFFED participants, Grant McKenzie, whose prolific output in recent years is hard to trace because he has been moving from print to ebooks and back to print.

Born in 1963, Grant McKenzie grew up outside Glasgow, Scotland, in East Kilbride, and he came to Canada with his family at age 13. Initially some of his short stories were featured in ‘Out of the Gutter’ and ‘Spinetingler’ magazines. While attending college, he worked for the Calgary Sun before becoming an editor at the Calgary Herald.

McKenzie’s first screenplay won a 2007 fellowship at the Praxis Centre for Screenwriting in Vancouver as he was contributing technology/humour columns to various magazines. Influenced by detective fiction from the likes of Mickey Spillane, Raymond Chandler and Dasheill Hammett, McKenzie published his debut thriller, Switch, as a mass-market paperback from Bantam TransWorld UK when he was living on the Sunshine Coast in 2010. It has been translated into German, Russian and Chinese.

McKenzie wrote the first novel in his mystery series, Angel With A Bullet, while working for the Vancouver Sun. When his contract ended, he moved to Victoria as Editor-in-Chief of Monday magazine in Victoria in 2011.

It gets dizzying after that.

In 2011, Grant McKenzie signed a two-book deal in the U.S. with Midnight Ink to introduce mystery lovers to a sassy heroine named Dixie Flynn. “As a rule-breaking reporter for alternative weekly San Francisco NOW, Dixie will do whatever it takes to get to the bottom of the stories she feels most passionate about.” Because this new series is written in first-person from Dixie’s point of view, McKenzie adopted the pseudonym M.C. Grant.

His first Dixie Flynn book, Angel With A Bullet, was followed by Devil With A Gun and then the third book in the series, Beauty With A Bomb. His Dixie mystery series was shortlisted for the Shamus Award in 2015.

Under his own name, McKenzie wrote a second thriller, No Cry For Help, published by Random House in the UK and Germany. A third thriller, K.A.R.M.A., was made available as an ebook on Amazon.com. Then in November of 2014, Grant McKenzie’s agent Amy Moore-Benson at AMB Literary Management arranged a five-book deal for him with Polis Books for the world rights for three new thrillers and two backlist titles—Switch and K.A.R.M.A.—previously released as ebooks in North America.

The fourth thriller is his most recent release, Speak the Dead. To get the details right for his thriller, Speak the Dead, featuring a gifted beautician named Sally Blue, Grant McKenzie joined a private chat room for morticians.

Initially the chat group was suspicious of McKenzie, worried that he might make fun of their occupation as they exchanged tips and tricks on how to make the dead look their very best for public viewings.

“But the group welcomed me when I explained that I was researching for a novel,” he says, “and that I had great respect for the work. Working closely with the homeless in British Columbia over the past few years, I have attended more funerals than I like to count. With trust established, they opened up about their special techniques.”

“The group told me about the proper application of makeup, the four important stages that separate the cosmetician from the artist.”

McKenzie was subsequently able to write the details of embalming with authority. He learned:

“The skin no longer breathes. The corpse is kept chilled and the natural dehydration that begins at death destroys elasticity.

“To preserve the body, as decomposition happened faster than most people thought, a surgical tube was inserted into the carotid artery, giving direct access to the heart.

“Approximately two to three gallons of formaldehyde-based embalming fluid was then pumped into the arterial system. This procedure flooded the capillaries and forced all the blood in the body out of a second tube in the jugular vein.”

At one funeral parlour, the embalmer added a special pink dye to the fluid as a way to counteract death’s dull pallor. The pungent fluid looked like Pepto Bismol.

At another parlour, a mortician named Jesús did a masterful job restoring a smashed skull with wire mesh and liquid polymer. He repaired a twisted neck with metal screws and plastic supports hidden from view (so long as nobody rolled her over). The broken front teeth were hidden behind a thin, opaque mouth guard. This mortician wanted to convince his employer to invest in a 3D printer that would allow him to reconstruct guests’ faces from scanned photographs. “Everyone could have an open casket,” he enthused, “even burn victims or those ravaged by disease. Imagine? I could print ears, noses, even whole faces.”

In the novel, Sally Blue is happy in her new profession until her past catches up to her. Enter the homicide detective Jersey Castle who doubles as a punk rock drummer by night.

The duality of Jersey Castle’s life is similar to the life of his creator. While McKenzie has just signed a five-book deal with Polis Books of New York, he’s still working during the day as the communications director for a street community centre in Victoria on Pandora Avenue that provides 1,500 meals per day as well as transitional housing for the homeless.

This year, in the aftermath of the CUFFED festival, Grant McKenzie will release three more novels, two of which are directly connected to Speak The Dead.

McKenzie’s April novel The Fear In Her Eyes introduces a new protagonist, Ian Quinn, a child protection officer with Children First in Portland, Oregon. It’s about a grieving father who discovers a heart-breaking truth about the death of his young daughter. His stand-alone thriller K.A.R.M.A. will be released in print for the first time as a trade paperback in July.

In September, Ian Quinn and Jersey Castle (from Speak The Dead) will return in a new hardcover from Polis Books, The Butcher’s Son. In that novel, Quinn discovers a dark secret about his family’s past that threatens his life and makes him question everything he thought he knew about the disappearances of both his sister and his father thirty years earlier.

For more news on the CUFFED festival, visit www.cuffedfestival.com