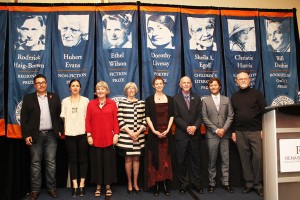 The 30th gala was also unprecedented because it was the first time  all seven prizes went to books published by B.C. publishers. It was the first time police cordoned off the venue for at least two blocks in all directions (in preparation for 5,000 runners to participate in the Vancouver Marathon on the following morning).

As well, it was the first time the most perennially dominant publishing houses, Harbour Publishing and Douglas & McIntyre, had the same publisher, Howard White, who celebrated the 40th anniversary of Harbour by hosting the event’s after-party. Ashley Little won both the Ethel Wilson Fiction Prize for Anatomy of a Girl Gang (Arsenal Pulp Press) and the Shelia A. Egoff Children’s Prize for her young adult novel, The New Normal (Orca Book Publishers). In thirty years, nobody else has ever had this ‘double-double,’ winning with two different titles in the same year. In her acceptance speeches, Little acknowledged David Chariandy for encouraging her to write Anatomy of a Girl Gang and Lynn Coady for encouraging her to turn a short story into a novel for The New Normal.

David Stouck won both the Roderick Haig-Brown Regional Prize and the Hubert Evans Non-Fiction Prize for his biography, Arthur Erickson: An Architect’s Life (Douglas & McIntyre). This book was also shortlisted Charles Taylor Prize and the yet-to-be announced Basil Stuart-Stubbs Prize for Outstanding Scholarly Book on B.C. Arthur Erickson died in 2009 at age 84. Stouck traces his life from its modest origins to his emergence on the world stage. At the gala, Stouck thanked Ethel Wilson’s niece, Mary Buckerfield White, for suggesting he should write the biography of her friend, Erickson, as well as his wife Mary-Ann, his friend Wayne Elwood and his editor Barbara Pulling for reducing the original manuscript by 40,000 words. “The biography was published because of two venerable figures in this province’s publishing industry,” he said. “Scott McIntyre responded enthusiastically to the manuscript when I submitted it in 2011 and, after Douglas and McIntyre closed, Howard White in 2013 made it possible that the book go forward. I thank them both. I would also like to pay tribute to Roderick Haig-Brown for whom this prize is named, by quoting something that Ethel Wilson wrote. ‘A man writes about a river,’ she says, but ‘Roderick Haig-Brown writes about a river that never sleeps. That is to say, there is truth and there is creation; the outward eye and the inward eye. And that is one of the mysteries that make literature.’ And I would add that it is only with the inward eye that we truly perceive the buildings of Arthur Erickson.”

First-time, First Nations author Jordan Abel received the Dorothy Livesay Poetry Prize for his critical investigation of the legacy of early-twentieth-century ethnographer, Marius Barbeau, for The Place of Scraps (Talonbooks).

Small press publisher Dimiter Savoff once again saw the high quality of his children’s list recognized when Julie Morstad took home the Christie Harris Illustrated Children’s Literature Prize for How To (Simply Read Books), her second win this category for a Simply Read title. Savoff’s imprint has had the winning entry in this category for three of the past four years. After 2012 LG Award winner Brian Brett publicly criticized the paucity of female recipients for the annual Lieutenant Governor’s Award for Literary Excellence since 2004, this year Kit Pearson received the $5,000 honour. It was split last year between Sarah Ellis and Lorna Crozier. Lieutenant Governor of British Columbia, Honourable Judith Guichon, was in attendance for the second time. If Brett and others are keeping score, that’s nine men and four women.

Last year’s emcee, Grant Lawrence, made the best and worst joke of the evening, depending on your taste, as a co-recipient of the Bill Duthie Booksellers’ Choice Award for The Lonely End of the Rink: Confessions of a Reluctant Goalie (Douglas & McIntyre). Having won this same prize for his first book in 2012, with Harbour Publishing, the smooth-talking rock ‘n’ roller turned CBC broadcaster Grant Lawrence opted to sign a contract with Harbour’s main rival, Douglas & McIntyre. After D&M went horrendously belly-up and the firm’s inventory and imprint was bought by Harbour, Lawrence found himself back where he started from, with Howard White. No other author has won the Booksellers’ Choice Award twice, with only two books—with two imprints—and the same publisher.

Adding a welcome dose of candour after some less than inspired speeches, Howard White told the audience about Lawrence’s duplicity. Unfazed, Lawrence referred to his winning book in reference to two recent hockey books by Bobby Orr and Prime Minister Stephen Harper. He said they were a team of sorts. He was the goalie. Orr was the defenceman. Harper was the right winger. Comedian and author Charles Demers once again proved himself to be the best host in the 30-year-history of the event.

After thirty years of prize-giving, some analysis might be in order.

The Duthie Booksellers Choice Award has been won by titles from either the Douglas & McIntyre/Greystone imprint or the Harbour Publishing imprint 22 times out of 30.

If one includes the Roderick Haig-Brown Prize for best book about B.C.—always won by a B.C.-published title—and if one excludes the Bill Duthie Booksellers Choice Award—which must be published by a B.C. publishing house—the breakdown since 1985 for winners published from B.C. versus winners not published from B.C. is almost fifty-fifty. To be exact, it’s 80-79.

The winning fiction title has been published from within B.C. only one-sixth of the time. Women win the Ethel Wilson Fiction Prize two-thirds of the time.

One Response to “Book Prizes’ 30th gala has five firsts”