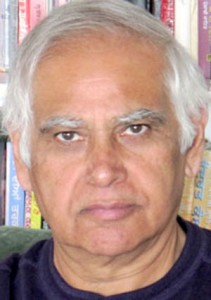 Sadhu Binning’s new fiction collection in English, Fauji Banta Singh & Other Stories (Toronto: TSAR 2014), examines the private lives in B.C.’s Sikh community–“the successes and failures, the growing and painful irrelevance of the old, changing values and the conditions of the women, the place of religion and tradition, and the ever-present echoes of distant Indian politics and national extremism.”

The stories represent a new stage in Binning’s writing career. “These are stories that I originally wrote in Punjabi,” he says, “and then sort of recreated them in English making necessary changes to make them sound more suitable to English readers. English is my second language and I have had a love-hate relationship with it since my high school years when I was regularly beaten by my English teacher for making simple mistakes. I can still feel the sting of his stick on my cold hands early winter mornings.”

Born in Chiheru, Punjab, India in 1947, Sadhu Binning immigrated to Canada in 1967. A founding member of Vancouver Sath, a theatre collective, and Ankur, Binning is a central figure in the Punjabi arts community. He sat on the BC Arts Board from 1993 to 1995. He has been on several advisory boards including Rangh magazine. His works have been included in close to thirty anthologies both in Punjabi and English. Also a translator, he is a founding member of Punjabi Language Education Association and have been actively promoting Punjabi language in BC schools. He has presented papers on language and culture in a number of international conferences. Binning lives in Burnaby with his wife Jagdish, son Preet and daughter Priya. He edited a literary monthly Watno Dur from 1977 to 1982 and he currently co-edits Watan, a Punjabi quarterly. He has been teaching Punjabi at UBC since 1988, eventually at the Asian Studies Department at the University of British Columbia.

Most of his books are in Punjabi and published in India.