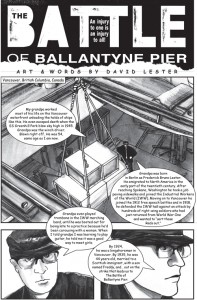 David Lester, author of the graphic novel, The Listener (Arbeiter Ring 2011), now into its second printing, will have his graphic short story “Battle of Ballantyne Pier,” about locked-out waterfront workers in Vancouver in 1935, published as part of an anthology of comics on Canadian labour history that is being produced for the Graphic History Project.”Drawn to Change: Graphic Histories of Working-Class Struggle” (Between the Lines, 2016) . The anthology is being gathered primarily by historian Paul Buhle for The Graphic History Project, based in Vancouver. Buhle is a retired professor from Brown University in Rhode Island. His anthology will also feature the work of Althea Balmes, Sam Bradd, Nicole Marie Burton, Sean Carleton, Robin Folvik, Ethan Heitner, Orion Keresztesi, Doug Nesbitt, Kara Sievewright, Jo SiMalaya Alcampo, Julia Smith and Tania Willard.